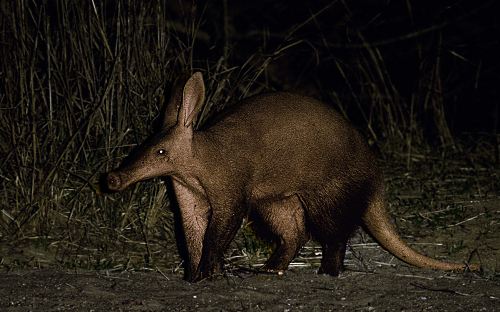 The opportunity to take an aardvark picture doesn't come along very often because they are nocturnal and very shy, so when Marc saw and photographed this one on a Robin Pope Safari in Zambia he struck the equivalent of the wildlife sightings jackpot.

There are many seasoned safari guides with multiple years of experience who themselves haven't seen this very elusive and enigmatic animal. I've been going on safari myself for more than 25 years now and this is one of the few species that continues to elude me, but God willing I will eventually find one and be able to take a photo half as good as Marc's.

Where To Find Them

They have an extremely wide distribution in Southern Africa, occurring virtually anywhere there is a ready supply of ants and termites for food, which makes it even stranger that they are so rarely seen.

The only place they aren't endemic is a small strip along the west coast of South Africa and Namibia which can't support it's food source because it's a desert area.

Safari areas where there is a better chance (still not a sure thing) to see them is South Luangwa National Park in Zambia and the Karoo area near Graaf Reinet in South Africa.

They have amazingly strong fore paws and long claws which enable them to dig tunnels in the ground of up to a metre in five minutes. They dig very large tunnel systems which can extend 6 m down into the soil and this is where they give birth to up to two young, normally between May and August.

It's a good thing that they are around to dig these tunnels because once they vacate them there are at least 17 other mammal species that use them for shelter.