Namibia safaris are an incredible experience but it can be difficult to pinpoint where and with who you will find the best possible safari in Namibia.

The trip reports, written and photographed by travellers who have already been on safari in Namibia will provide you with a good insight into what to expect on such a trip.

You can find out where, and what wild animals were seen including some fantastic photographs. The travel reviews will give you an unbiased viewpoint on Namibian safaris.

It often happens that the most valuable information you can get about a travel destination is from somebody who has actually been there.

So don't be shy, read through other peoples experiences here and make use of what they learned to improve the quality of the trip to Africa that you might be planning.

The Namibia safaris reviews let you find those nuggets of invaluable advice that could make a huge difference in the success of your dream holiday. Take a look at the reviews below and get advice, tips, recommendations right from the "horses mouth". 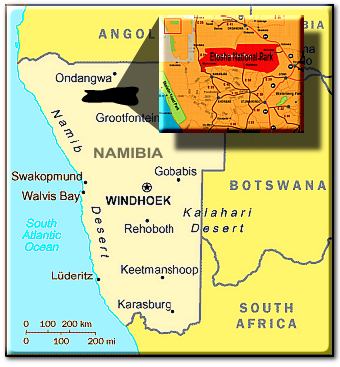 The Etosha (satellite map and distance table) National Park is rated as one of the worlds greatest wildlife-viewing venues.

It's one of the few places in Africa where you can even watch wildlife at night from the camp at one of the floodlit waterholes. Your chances of seeing most of the animals here are very good because there are only a few waterholes in Etosha for them to choose from.

This park is rated as one of the top four Namibia tours destinations.

Namibia Africa trip report » If you ever plan a safari to Namibia then this travelogue will be an invaluable aid because of the tips it contains. Joe particularly enjoyed Etosha where they saw most of the wildlife that the park has to offer including a leopard outside the reserve's gates...

Travel Namibia epic » A seven week trip to many of the classic Namibian destinations like Etosha, Sossusvlei, Fish River Canyon...

Namibia Holiday » Fantastic diary about a two week trip covering most of Namibia. Gives a great idea of all you can see and do there and how to approach a Namibia self drive safari. Namibia lends itself particularly well to simply hiring your own car and driving around to all the highlights...

Request full trip report » One of the most amazing trip reports about Etosha that I have ever seen. All the action took place at the floodlit waterholes at night including eight black rhino turning up for a drink at the same time and a successful lion ambush of a gazelle...

Request full trip report » Richard spent time at all the camps in Etosha and especially at the floodlit waterhole on this amazing photographic safari. One of the highlights included a cheetah hunt with this fantastic feline accelerating to top speed in a matter of seconds but still failing to catch a zebra...

Request full trip report » Niamh and Cathal were impressed with Chameleon safaris and they recommend them for a Namibia safaris trip in particular for the fact that they only allow a maximum of eight people on the tour so you get all the benefits of being in a small group.

The guides were Martin and Joe and the vehicle was a modified Land Cruiser which allowed them to get close to a lioness with six cubs trailing behind her, elephant and white rhino amongst others... 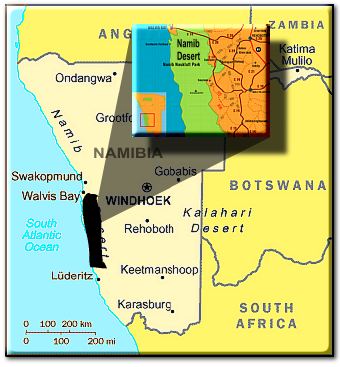 The Namib desert is one of the oldest and driest deserts in the world. The star attractions of the Namib are Sesriem and Sossusvlei.

Sossusvlei is a pan lying amid sand dunes which reach up to 200m above the valley floor. Here you can spot gemsbok, ostrich and a wide variety of bird life if the pan contains water, which it does on an intermittent basis after good rains.

The desert has its own characteristic beauty which can't be found anywhere else in the world as it's unique to this area.

Request full trip report » Not even a three day sandstorm could put a damper on this Namibia safaris journey for Geoff. He was amazed by the size of the weaver nests, which can become so large that they actually break the trees in half that they are built on...

Request full trip report » Imagine watching a gorgeous sunrise from the top of a 120 metre sand dune. Well Jaqui and Lars experienced that from the world famous dune 45 in the Namib desert and were really humbled by what they saw...

Request full trip report » Kate didn't make it to the very top of the dune because a sandstorm came up which slowed her progress. Later on they met Boesman (Bushman), a Namibia safaris guide who is one of the true characters of this region and very passionate about the desert and all its wildlife...

Request full trip report » One of the star attractions of the Skeleton coast is the Cape fur seals who have made a permanent home at Cape Cross. The colony numbers hover around 100 000 with the big bulls only resident during the breeding season which kicks off in October every year.

Patricia could smell the presence of the colony on her Namibia safaris trip minutes before she saw them and the noise of so many seals was remarkable. She was also amazed by the fact that the mothers could recognise their own babies in the chaos...

Request full trip report » Elaine was on a round the world trip and Namibia was shaping up to be one of her favourite countries. They had lunch next to the remains of a ship that had been wrecked on the desolate Skeleton coast before moving on to visit the seal colony...

Request full trip report » The Waterberg Plateau is so large that it dominates the landscape and Jayne felt that the accommodation was too close to the plateau which made it difficult to enjoy the view.

The pool was fantastic but they didn't go on any of the walking trails because of the heat and also passed up the opportunity of going on a game drive to possibly see black rhino because they had already seen a lot of wildlife in other areas of their Namibia safaris holiday...

Request full trip report » The baboons are very inquisitive residents here as became evident in the early morning when the whole troop climbed onto the roof of the bungalow making a huge noise in the process.

The hikes didn't deliver much wildlife apart from some antelope and some wonderful birdlife but the views from the summit were really worthwhile...