I have been taking wildlife pictures on African photo safari trips now for more than a quarter of a century and there has been one factor above all others that improved my wildlife photography attempts remarkably.

It has nothing to do with f stops, lenses, composition, the camera or even photography technique itself. Those are the basics that every wildlife photographer grapples with to get passable pictures anyway.

No, the one major thing that has allowed me to take wildlife pictures that often generate positive comments from people who view them is this...

Ok, here's a practical example from my experience why independent self guided African photography safaris will help improve your wildlife photos by leaps and bounds.

I took the lion photograph below on a self drive safari to the Kruger National Park in South Africa recently. 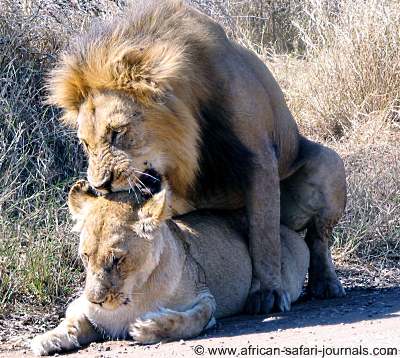 The fact is that if I had been on a guided safari it would have been impossible to take this picture because I had to wait about two hours before this sequence occurred.

A guided safari operator doesn't have the luxury of being able to spend so much time with an animal because they have to keep all their guests happy and move on quickly to try and find something else.

In fact I saw a few of these safari vehicles, packed to the brim with African photo safari travellers, stop for five to ten minutes to allow everyone to get a lion portrait and then charge off again. Needless to say they didn't get to photograph what I did.

Patience in wildlife photography is often the only difference between a mediocre portrait picture and one that will wow the folks back home. And self driving gives you the luxury to decide when to wait and when to go. You call the shots, literally.

So as you can see, going on a self drive African photo safari gives you an almost unfair advantage over the guided safari brigade when it comes to wildlife photography.

How To Get the Unfair Wildlife Photography Advantage Yourself

It may sound like a difficult thing to guide your own African wildlife photography safari, but let me assure you it's not. Like I said, I've been doing it for over 25 years now and have got it down to a fine art.

In fact, I've been doing it for so long now that I thought I may as well write a guide to help anyone to successfully go on self drive photo safaris in Southern Africa. I've covered the top game reserves and national parks which I have self driven numerous times myself. Everything you need to know about guiding your own safari is detailed in this 248 page guidebook.

Learn how to Guide Your Own African Photo Safari here...

I'm confident that going on your own independent African photo safari will help improve your wildlife photography as much as it did mine.

Back to wildlife photography page or top