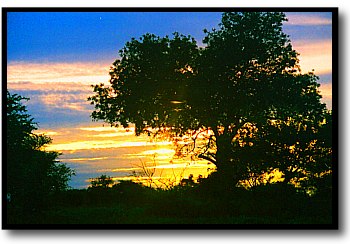 Over Christmas, we stayed at Baobab Camp, which lies in the valley of the Great Ruaha River at the foot of the Udzungwa Mountains in Tanzania, and went for a trek up the nearby (and unknown, in tourism circles) Mlima Mweusi (the Black Mountain).

With two donkeys carrying the supplies and tents, and two Maasai warriors as our guides we set off through the lower baobab trees on what proved to be a fairly tough two-day hike. As the trail climbed, so did the level of difficulty. I was glad I had with me a copy of Steve Foreman’s book, How to survive safaris, camping trips and expeditions in Africa. It proved to be a handy companion.

After some six hours of climbing and pushing through some fairly thick, difficult bush, we came – sweaty and tired, covered in the dusty detritus of vegetation, and with some seriously aching feet - to an open area of exposed granite slabs. Nearby was a freshwater spring that filtered down through a small sinister bed of thick papyrus to become a narrow stream that wandered off down a valley.

As soon as the tents were up, I went off to a small deep pool in a rocky basin among the papyrus. I stripped off my sweaty clothes and sat naked in the cool water; the itchy dust and muscular aches gradually dissipating. Despite the clouds of silt disturbed by my aching feet, the tadpoles nibbling at the hairs on my legs, and the dragonflies trying to settle on my head, it was a moment of total peace. However, a few moments of this little bit of heaven was brought to an end by a slithering noise in the tall papyrus. Being an ideal habitat for python – but not really for human – I quickly rinsed my body, and hurried back to the camp, not waiting to see if the slither was snake or imagination. By the time darkness fell it was raining and we were ready for bed.

Early next morning, leaving one of the Maasai with the donkeys and tents, we set off for the summit. Again the terrain was difficult in places and the views, glimpsed only occasionally through open spaces in the trees, were blocked by rain clouds at first, then later by thick mists rising with the heat of the hidden sun. Finally we came out into the open, and were afforded good views across the hills to the peaks of the Udzungwa Mountains. We could also see the summit of our objective, wreathed in mist, and still seeming far off. We were all tired from the climb, and the prospects did not look good. But with a renewed burst of energy), we strode off into the mist, and an hour later reached the summit.

We returned to our camp, and after a welcome breakfast of pancakes we packed up and set off back down. The descent was, as always, hard on the knees, and I was very glad to get back to the camp – where our loved ones and cold beers awaited us! Only those present will know which we embraced first.