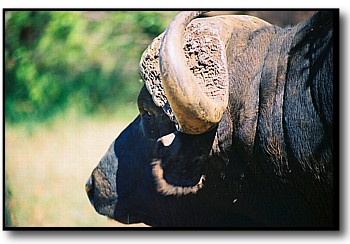 Many buffalo pictures are deceptive because they seem to show an animal that is placid and unthreatening, much like a domesticated cow. For the most part this is true, but if you antagonise a buffalo their real character comes to the surface, and then you are faced with an animal that is one of the most dangerous in the African veld.

There are stories told by hunters about buffaloes that vindictively lie in wait for them while they are being tracked, or actually follow the tracks of the hunter themselves to try and gore them by surprise.

And then there are the cases where people have been walking in the bush and stumbled across one of these huge animals by mistake, only to escape by the skin of their teeth after being charged, or in some instances, not escaping at all.

Not to mention that many a lion has been on the receiving end of that huge boss of horns when the hunter suddenly becomes the hunted. The moral of the story is not to mess with a buffalo, no matter how much they look like cows from a distance.

Buffalo pictures are not too difficult to take because they often appear in large herds that move along pretty slowly, allowing you to take a group picture or singling out specific ones as they trundle past.

The babies make very good subjects as they are normally more active than the adults and a lot cuter to boot. But an old bull with huge horns, battle scars and caked with mud can also provide interesting shots. Zooming in on a specific body part can provide a different perspective and is normally possible because the herd normally allows you to get pretty close in a vehicle.

Exposure can be problematic because they are so dark when there is a very light background, so keep that scenario in mind because it tends to happen every now and again.

These large ungulate's are normally accompanied by egrets which feast on the insects disturbed by the hooves of the herd and oxpeckers which peck ticks of their bodies, so you can practise your bird photography at the same time too.

If you can capture them doing anything other than feeding or walking along you are doing pretty well. Water livens things up considerably as they enjoy rolling in the mud and splashing about. 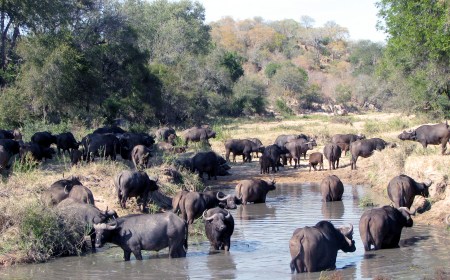