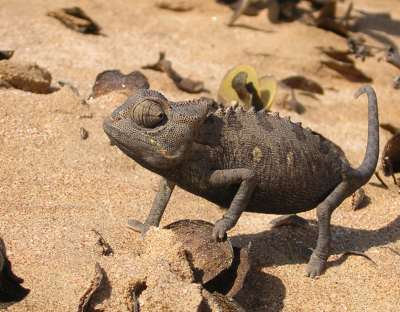 This is still one of my favourite chameleon pictures. I took it in the Namib desert just outside the town of Swakopmunt in Namibia while on an amazing 4x4 safari to see some of the creatures that inhabit this part of the world.

We found this one in some scrub vegetation between some soaring sand dunes where he had taken cover from the heat of the sun. Here he would lie in wait for any insects that cross his path and would try to gobble them up before they escaped.

It's hard to fathom how they can survive in such an inhospitable place but there seems to be enough food and moisture to sustain them.

Most of my photographs of these adaptable reptiles depict them hot-footing it across tar or dirt roads to try and get to the other side. This is normally quite a comical spectacle because of the rocking motion that they employ, it's almost like they go two steps forward and then one step back for some strange reason.

Other than that, it's reasonably difficult to get chameleon pictures any other way on safari because they are so good at blending into the long grass and foliage with their camouflage ability. They are a lot easier to spot on a night drive because they reflect back the spotlights somewhat but then it's not possible to get decent pics of them.

Best Places To Photograph Them

The Namib desert in Namibia is tops because you are virtually guaranteed of seeing one as the guides who take you on the trip know where they hang out.

Another good reserve to find them is the Kgalagadi Transfrontier Park which is a semi-desert area with good visibility due to the limited vegetation. But here it's more a case of being fortunate if you do come across them, though your chances are better than most other game reserves.

I've seen a fair number in the Kruger National Park in South Africa but not really on a regular basis, they pop up every now and again.