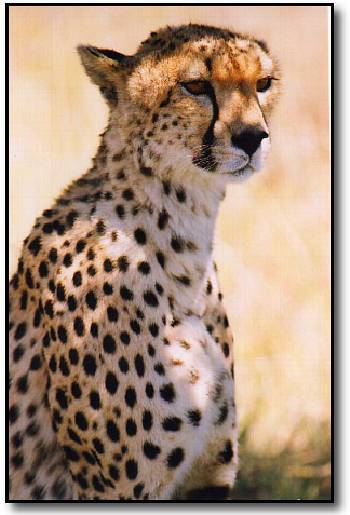 This stunning cheetah picture was taken by a safari traveler to the Masai Mara in Kenya.

It's a fair bet that you will get a chance for a cheetah photo in the Masai Mara reserve because they are spotted regularly there. The open grassland is ideal for them to hunt in by using their amazing speed and agility.

Interestingly, the reason they prefer grassland to habitat punctuated by trees has been made clear by what's happening in Namibia at the moment, an African country which has the largest population of free ranging cheetah in the world.

The destruction of large areas of grassland for farming purposes has forced the resident population of cats to live in areas that have a much larger percentage of tress than they are normally used to.

This has lead to a very high incidence of blindness in one or both eyes of the cheetah population, because they are forced to run under trees during their high speed chases of prey and they don't have time to dodge the thin, low hanging branches.

A branch, however thin, striking the cats eye at speeds of up to 100 kmp/h causes a lot of damage, and in many cases, permanent blindness.

Fortunately, there are a dedicated group of conservationists that are helping to rehabilitate and support the blinded cats, but the root cause of the problem, habitat destruction due to human encroachment, remains unresolved and will probably only accelerate going forward.

So the opportunities to get photographs of these wonderful cats are going to decline more except in the game reserves and national parks of Africa.

If you are lucky enough to be on safari and encounter these amazing cats, the chances of getting an action cheetah picture is reasonably remote. More likely you will see them lounging around in the shade of a jackalberry tree, or finding a vantage point on a termite mound or fallen branch to check out their surroundings.

I have had the good fortune of seeing a cheetah chase after an impala, but it all happened so fast that I didn't even have time to lift up my lens, and then the hunt was over (the impala got away). Still, the unpredictability of wildlife photography is one of the things that makes it so much fun, so you never know what could happen.

They do tend to be a lot more active than lions during the day so you won't have to spend hours waiting for them to do anything other than sleep.