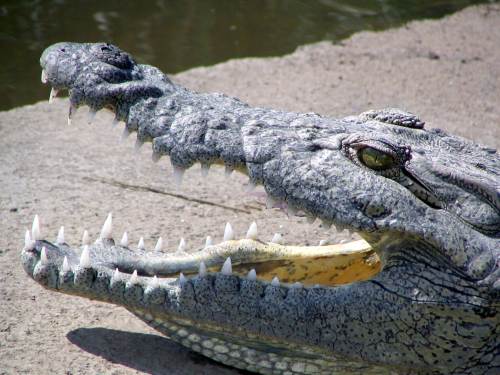 When taking crocodile pictures you are in effect photographing a dinosaur. They have been around virtually unchanged for approximately 200 million years so pictures of this reptile depicts an animal that is a master at survival.

Meeting One On Foot

I've has some very interesting crocodile encounters over the years that I've been going on safari, but one of them has really stood out for me. It occurred when I was on a walking trip through the Kruger National Park, which is an amazing experience.

We were walking alongside a river with the ranger leading when he suddenly bent down and started digging in the soft sand underfoot. We all wondered what he was getting up to until he unearthed a white, oval shaped crocodile egg. It was warm to the touch and there were a lot more down there covered in sand.

We passed it around for a few moments and then the ranger returned it to its original position. We couldn't stay too long because the mother crocodile stays in the area to protect her eggs and then we heard the deep roar of a crocodile calling so we got out of there pretty rapidly.

To get crocodile pictures where they are doing something other than basking in the sun or drifting in the water is pretty rare. If you do, consider yourself very lucky.

You can increase your chances of getting a noteworthy photo by exercising a lot of patience next to a water hole or river where crocodiles are present. The problem isn't really finding them, it's to be there when they actually do something worth taking a photograph of.

But even portrait photos of them can be impressive, especially when they show their teeth. Always make sure that you keep their eyes in focus when taking a head shot and try to zoom in on a certain area of interest like a tail or their claws. 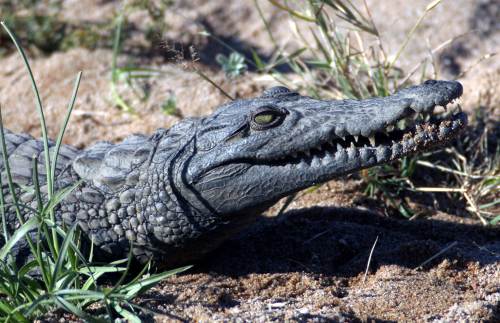