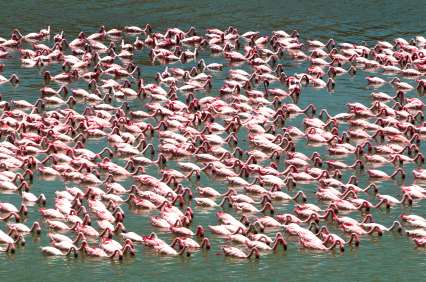 Flamingo pictures nearly always seem to show these ungainly looking birds in huge flocks. The reason for that is that they find safety in their vast numbers.

A predator will have difficulty singling out a specific bird while there are so many of them about. But if one of them is sick or injured they become very vulnerable because they then stand out from the crowd.

These photographs of this interesting bird were taken in the Ngorongoro Crater lake in Tanzania which supports thousand of flamingos of both the lesser and greater variety.

It might not be too clear from the picture above but the birds are dragging their beaks through the water. They do this because they are filter feeders, sifting seeds, blue-green algae, crustaceans, and molluscs from the water with a sideways motion of their heads.

Where To Find Them

The lesser flamingo is primarily an African species and they need a very specialised type of habitat to feed and breed, which unfortunately makes them very vulnerable to the habitat destruction that is happening across the globe. Their numbers are declining, as are the places where they can survive and thrive.

But Southern Africa is still a haven for them, particularly South Africa, Namibia and Botswana. Kenya, Tanzania, Ethiopia, Zambia and Angola are other regions on the African continent where you could come across significant flocks.

How To Photograph Them

First and foremost, is a good zoom or telephoto lens because they are most likely to be in the middle of a lake when you are trying to snap them. On the other hand, a long distance picture of the whole flock in total is a good way to convey some proportion so don't forget to zoom out too.

Exposure can be a problem because of the reflective surface of water where they most often are, so be prepared to bracket your images with an f stop opening each way. 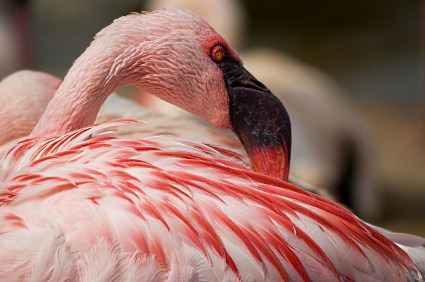