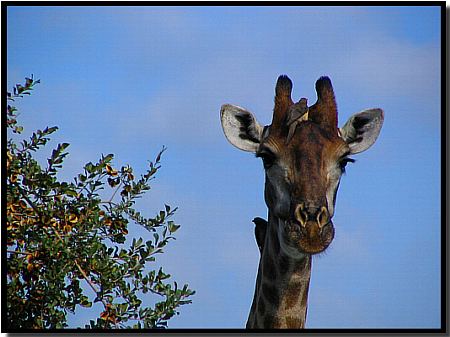 It's not too much of a challenge to get giraffe pictures in African game parks as they are relatively common. Giraffe are curious animals, they often stand and inspect you as you draw near to them and continue watching as you go past.

They do the same thing with any predators in the area, so they can be considered to be a 'pointer' animal, very handy if you are trying to track down the big cats to photograph them.

Obtaining portrait photos of these long, gangly animals shouldn't really be your primary objective if you want to take some striking pics on your safari. Photos depicting behavior are first prize here such as for example, the contortions that a giraffe goes through when it bends down to drink at a waterhole.

Or the violence and aggression of two males as they fight by clubbing each other using their long necks. I've seen this happening at a distance of about 200 meters and I could hear the deep thuds a few seconds after the massive impacts occurred. The carried on for about 20 minutes until one conceded and ran away.

Behavior like this defines the characteristics of the animal and makes the images a lot more powerful than portraits ever could be. Of course, you need a bit of good fortune to find them exhibiting some special behavior, but that's one of the huge charms of a safari, you just never know what could happen around the next corner.

One effect of them being so tall is that it can be a struggle to frame them properly, especially if you have a fixed lens. I try and overcome this by zooming in on a specific part of their anatomy such as the face, hoof or tail. These can sometimes be more interesting than a photo of the whole animal itself.

And always watch out for interaction between giraffes because you can obtain some very creative angles having more than one of them in the shot. They are also often found in the company of other species so you can use that to your advantage to liven up a normal portrait tableau. 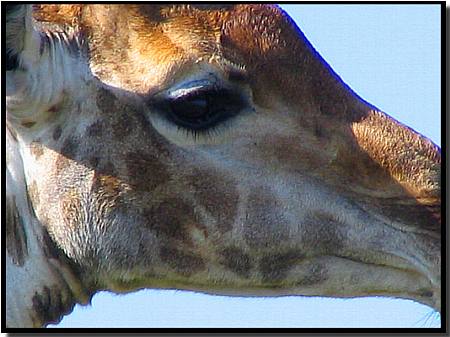