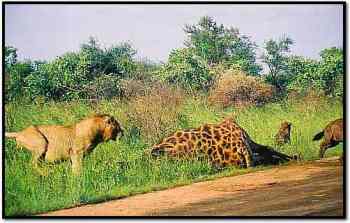 These hyena pictures show a remarkable sequence of events that occurred in the Kruger National Park when a clan of these scavengers attempted to tuck into a giraffe that had already been killed by some lions.

The lions, as you would expect, didn't take too kindly to that and an old male charged at them, causing them to scatter in all directions. But that was seemingly all part of the plan, because while he continued pursuing one of the hyena, another one darted in and stole some of the lions hard earned meal.

Beautiful they are not, but they have loads of character and this can translate into some wonderful hyena pictures if you take the time and trouble to compose them correctly.

Finding a hyena den is a bonanza because then you might have the opportunity to photograph young ones too and a lot of interaction between members of the clan. They sometimes make their home in culverts situated right next to the road so you will often be able to get some full frame pics even without a powerful zoom lens.

I found a den just outside the Mopani rest camp in Kruger and I was fortunate enough to catch the mother just as she was feeding her pups. They both seemed to be very thirsty and consumed a lot milk, after which there was a lot of rough and tumble between the two until their mother decided to put an end to it and shooed them into the den again. 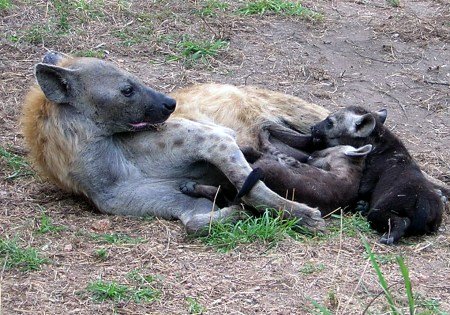 The rest of the clan was out hunting and scavenging and when there is a group of them together they are very efficient in pulling down all sorts of prey. But when there is only one or two off them the pecking order is very different.

I recall seeing two hyena lying in the middle of a small dam and the kudus, giraffe and impala that had come down to drink were circling around warily, not daring to go too close. The next moment a big male warthog ran out of the bush, headed straight for the dam without a moments hesitation, lowered his head and charged.

The hyena shot out of the water as fast as their legs would carry them and loped off, leaving the victorious warthog to his mud bath.