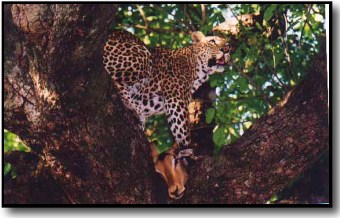 This leopard picture shows the iconic African cat in a place you are very likely to see it. Up a tree - but it's not often you see a leopard pic with the prey it has dragged up there for storage.

The leopard photo was taken in the Mala Mala reserve in Southern Africa, but there are a lot of other places in Africa where you will find excellent opportunities like this to take your own leopard picture.

These enigmatic cats are very elusive but they are strongly territorial which means that they can often be found in the same areas at certain times. For example, there is a resident leopard in the Kruger Park at the Malelane gate that is regularly seen in the morning or afternoon in roughly the same place.

So to increase your chances of finding and photographing one, it makes sense to be in an area that they have been spotted before. Of course, there is no guarantee, as I've seen leopards at many different times of the day, some active during the highest heat of the afternoon when conventional wisdom says that they should be lying quietly in the shade somewhere.

Possibly the only predictable thing about these wonderful spotted felines is that they are wildly unpredictable.

Finding them is only the start of the difficulties when trying to get a leopard picture. When they are on the move they often use long grass, bushes and trees as cover so getting a clear shot can be problematic. The best photos opportunities can often be found when they are resting in a tree, such as the one below.

Once they are on the ground they tend to blend in quickly and soon the only part of them that is visible is the white tip of their tail as they dissapear into the undergrowth. So be sure to take several photos while they are still visible because it might not last.

But remember to hang around for awhile even after the cat isn't visible anymore because they often double back on their tracks and sometimes climb a tree to settle down for awhile. Patience is the watchword here because you just never know what they are going to do next.

I normally drive slowly up and down in the area for about 20 minutes after I last sighted the leopard before moving on and often I see it again in that time. 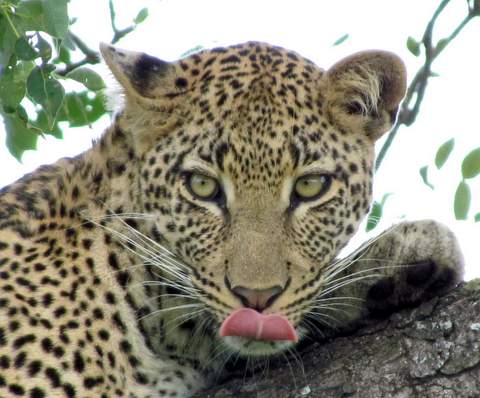