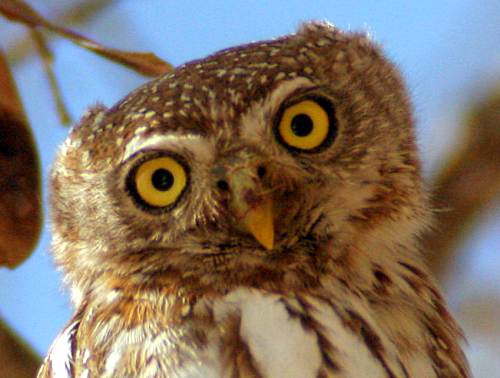 This owl picture illustrates the huge eyes that all of these birds come equipped with to make hunting and catching their prey easier. Ever seen photos where the bird is swooping down on an unsuspecting mouse with it's claws outstretched? The mouse has eyesight that is about 50 times less sensitive than it's hunter.

It's a bit of a mismatch really. Because of the size of the eyeballs they are incapable of moving in their sockets and so the bird needs to swivel its neck to look elsewhere. You will never see an owl photo where the eyes aren't aligned dead centre.

It's always a big bonus when you find one of these wonderful birds sitting in a tree on safari. Because they are mostly active at night it can be difficult to find them during the day, but they do tend to have a favourite spot to try and catch some sleep before heading out at dusk to hunt.

Which is why it's possible to find the Scops species regularly in the Kruger Park because they stick to the same roosting areas such as the pair that can be found in a tree at the Afsaal picnic spot on the way from Malelane gate. I've seen and photographed them there often.

The Pearl Spotted owl is very active during the day and their distinctive call will often alert you to their presence. I've seen one catch a chameleon and fly up to a roost in a tree to start eating, but it was a long process and within an hour it was still enjoying the meal.