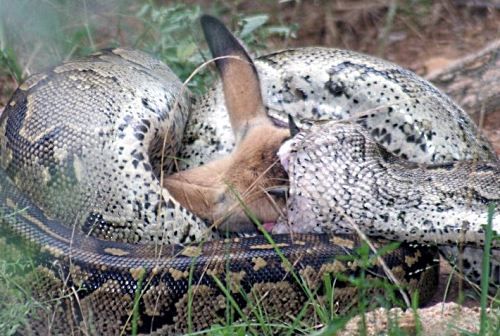 Good python pictures showing the snake devouring it's meal are pretty rare but the photo above shows exactly how this big reptile goes about it. The African Rock Python is the largest snake to be found on that continent and they can grow to be up to 5.4 metres (18 feet) in length.

Its diet consists of monkeys, pigs, deer, small apes, birds, and other animals and they have even been known to eat small crocodiles.

After eating a large animal, the snake needs no food for a long time, and may rest for weeks. In this engorged state, it is most vulnerable to attack by predators. They don't chew their food at all, rather swallow it whole as the python photos here show and then rely on their powerful stomach acids to do the job of digesting.

The female lays 30 - 50 large, almost spherical eggs and coils around her clutch to protect them, but does not incubate them by shivering. The young hatch in 65 - 80 days.

They are found south of the Sahara desert often near grasslands and water. They are not dangerous to man being non-venomous but they can inflict a nasty bite if threatened.

Where To See Them on Safari

In many years of going on safari, actually more than 25 years now, I've seen these large snakes only four times in total, and that was all in the Kruger National Park.

On one occasion, at the Nkulu picnic spot ironically, a vervet monkey had been caught and the snake was lying motionless, curled around the unfortunate primate. Another time was when the big reptile tried to cross the road but was scared back into the bush by approaching motor vehicles.

The Kgalagadi Transfrontier Park is also a good area to find them in Southern Africa. 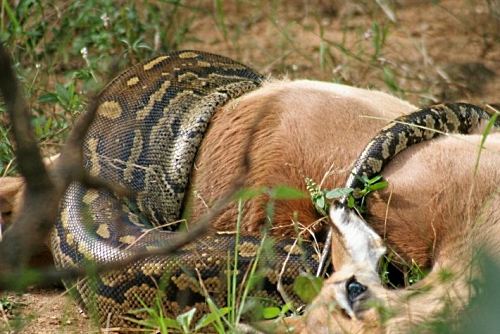