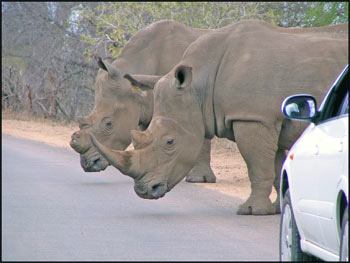 White rhino pictures are still reasonably easy to come by in many reserves in Africa, particularly Southern Africa. But that might not be the case for much longer unfortunately.

Poaching of these magnificent creatures in South Africa for their horn has increased to such an extent that their continued existence is being put into question. More are being killed every year than are being born and that is a recipe for extinction.

It's not the first time that the rhino has been on the precipice, during the 1960's their numbers were also dangerously low. Conservation efforts since that time have managed to see an increase in their numbers but that trend is reversing because of the higher poaching.

More demand for rhino horn is leading to much higher prices which means criminals are prepared to take bigger risks in getting hold of them. 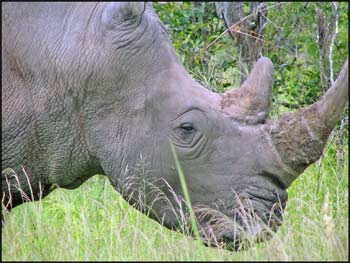 I've had some very memorable encounters with rhino over the years - I proposed to my wife overlooking a water hole in the Kruger Park and moments after she said yes a rhino burst out of the bushes being chased by another. We had a good chuckle about that.

On another occasion we were watching two females grazing next to the road when they started edging closer and closer to the car. I'd turned the ignition off and didn't want to start it again with them so close for fear that they would get startled and charge. So we sat tight and waited (my window was open too)...

Eventually, one of the rhinos came so close that her muzzle imprint was left on the door of the car where she sniffed at it. If I had reached out my hand I would have been able to touch her on the withers. She sniffed for a few moments and then retreated, I wondered for a moment if she was going to charge, but she just went back to grazing peacefully. What an amazing encounter that was.