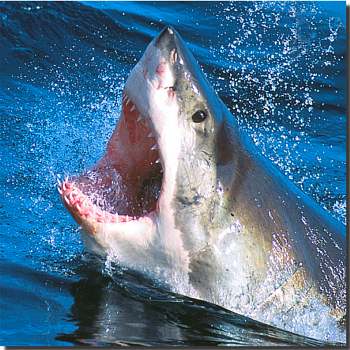 The shark picture above shows a great white stretching its considerable jaws after breaching the surface of the ocean.

Great whites average between 3 and 4.5 metres (10 to 15 feet) but they have been known to grow up to 6.4 metres (21 feet) in length. Not bad for an animal that has a skeleton composed entirely of cartilage.

They have a varied diet and no natural predators apart from man. They feed on fish, squid, other sharks, dolphins, whales, seals and sea lions. They scavenge the carcasses of large whales as well.

So how do these amazing fish find their prey? Two ways - they have a highly developed sense of smell and the ability to detect the electrical fields radiating from living creatures.

The teeth that can be seen in many shark pictures are a marvel of evolution. Each upper tooth comes equipped with hundreds of tiny serrations. This coupled with their enormous jaw strength enables the great white to cut through anything that it might catch in its hunting forays.

The bottom teeth are not as large but serve the purpose of skewering the shark's prey, holding it in place for the upper teeth to do their work - which is to remove as much flesh from the shark's prey as possible.

One of the best places in the world to get a great white photograph of your own is in South Africa where cage diving brings you face to face with these magnificent creatures.

I've been on a trip to Gansbaai, which is close to Hermanus in South Africa, to try and see these magnificent creatures from a little bit closer using a boat with a cage attached to the side of it.

It was early December, which is actually not a very good time of the year to attempt this because there are less sharks around, but I went anyway with high hopes and wasn't too disappointed.

The skipper took the boat out some distance from shore and then stopped to allow us to drift in the waves and await the arrival of the apex predators. The problem with the drifting is that even if there is a small swell the boat rolls back and forth and this caused me to develop seasickness, a none too pleasant condition.

But the discomfort was worth it, because soon a lithe, long bodied shark appeared, probably about 3 metres (10 feet) in length, sliding leisurely beneath the boat. I could see it clearly beneath the waves but unfortunately the swell was too choppy to be able to get into the cage for a closer underwater look.

Still, an amazing experience to see this often misunderstood and falsely maligned creature in its natural habitat.