These two boomslang were mating in the treetops at the Afsaal picnic area in the Kruger National Park. We had just sat down at one of the outdoor tables to enjoy a late breakfast when the commotion broke out in the tree above our heads.

We quickly moved away to allow the boomslang some space as they are one of the most venomous snakes in Africa and both looked in a pretty agressive mood.

As it progressed they eventually dropped out of the tree onto the ground and then slithered away into the undergrowth. Very exciting and pretty rare encounter with these snakes that are normally shy and reclusive in nature.

We were careful, but boomslang bites to humans don't happen very often. You are more more likely to be bitten by the character in the photo below, the Puff Adder.

Why? Because they are very lethargic and don't move off when humans approach like most other snakes. I've been on a hike in the mountains of South Africa where the person in front of me stepped about a foot away from one of these without noticing it because it lay so still. If he had stepped on it he would have been bitten.

The one in the picture was crossing the road in Kruger very slowly but fortunately we were in a car so we could watch him closely as he went about his business. 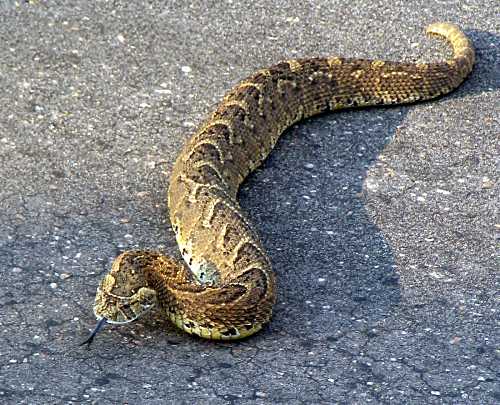 In all the years that I've been going on safari (more than 40 now), I haven't seen and taken snake pictures of as many of these reptiles as one might expect. I suppose it's more difficult to come across them when in a vehicle, because they sense the vibrations and dissapear long before a person gets a chance to see them.

Which is a pity, as they are really a sight to behold when in their natural habitat.