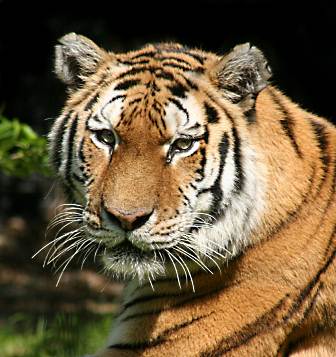 This tiger picture shows a full grown male in the prime of his life. This is the biggest member of the cat family in the world, even the African lion is smaller in size and stature than the beautiful cat above.

Like many images of this cat, it was taken in a zoo because they are so endangered that the opportunities to take a successful photos of them in the wild are diminishing rapidly. Individual numbers worldwide excluding zoos are estimated to be around about 5000 so they are dangling over the precipice of extinction.

Concerted efforts are being made to conserve them but it remains to be seen if in the very near future the only way to get a picture of a tiger will be in a zoo.

There is even a breeding program that has been developed by John Varty in South Africa where the idea is to eventually re-introduce the African born tigers into their natural habitat.

African experience with other big cats could prove invaluable when applied to tigers, as they are all members of the same family and exhibit similar characteristics and behavior. 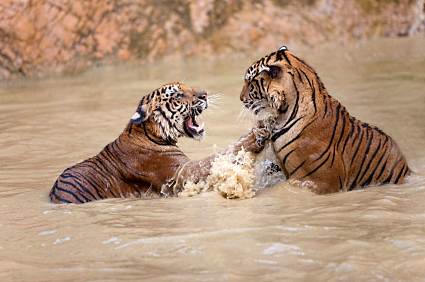 One of the things they don't share with their African cat cousins is a willingness to go into the water as can be seen from the tiger picture above. In fact, they seem to enjoy it and regularly go in to cool down, play or hunt for a meal.

Lions, leopard and cheetah on the other hand, would very rarely immerse themselves like this and rather go out of their way to avoid getting into the water.

Another more obvious difference is the coat colouring which works very well in a forest environment but doesn't blend in quite as well on the African savannah. Whether this would prevent them from being effective at catching prey in Africa is a question that hasn't been resolved yet.