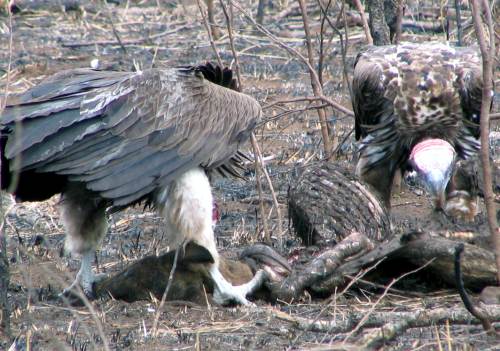 Many vulture pictures show these ugly birds jostling around a carcass trying to get the best position to feed. But the popular belief that vultures are completely reliant on the left-overs of predator kills is somewhat of a myth. They are supreme opportunists and will visit the site of a kill if there is still food available but they mostly feed on the carcasses of animals that have died of old age or disease.

So this makes them very vulnerable to poisoning which one of the major reasons for the alarming decline in the numbers of these birds. It's pretty rare to see them outside of protected areas in many African countries now.

One of the best sightings I've had of these birds was at a cheetah kill where it was possible to see exactly how their social hierarchy works. The Lappet-Faced vultures are dominant because all the other vultures gave way as soon as they landed and sauntered over to the carcass. They are bigger with the most powerful beaks so it makes some sense.

The Cape vulture ranks next, pushing the White-Backed into third place in the feeding rankings, but there are squabbles between them to sort things out all the time. The Hooded vulture is last in line, probably due to being the smallest and least aggressive.

It's interesting to note that when there were many vultures surrounding the carcass they intimidated the cheetah that made the kill so much that she abandoned her meal, so there seems to be a hierarchy between them and mammals too. Not so with a hyena that turned up late to the feast, he just charged straight ahead and all the birds scattered to make way for him to feed on the remaining scraps and bones. 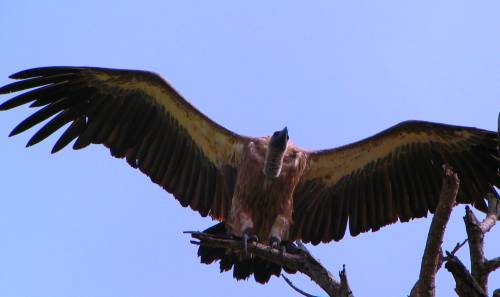