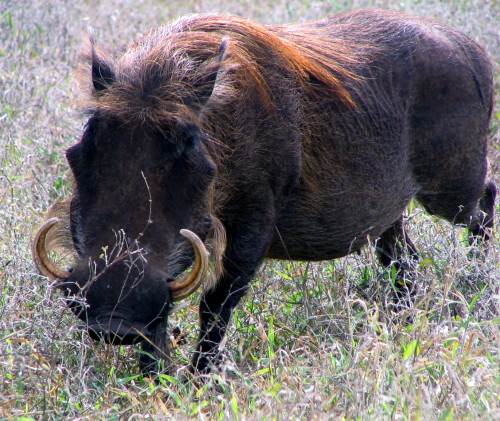 These warthog pictures show the comical African pigs displaying tusks of all different shapes and sizes. The upper tusk normally average around about six inches and they are used as aids in digging up the grass, tubers, roots and bulbs that it feeds on and also as a defensive weapon against attacks by lion and leopard.

They make for potent weapons and the pig really does know how to use them when threatened. Something it attempts to do when attacked is find a burrow in the ground to reverse into so that it can challenge its attacker directly with these formidable teeth.

I've had some very interesting warthog encounters over the years I've been on safari in African parks which mostly involve predators of some kind.

Once I stopped my car to photograph some warthog who were on their knees feeding on grass right next to the road. As I was focusing on them I felt a light tap on my shoulder from my wife but I didn't respond immediately because I wanted to get the picture. When she whispered, " leopard...", she got my attention immediately.

The cat was staring at her through the car window on the other side of the road where he had been stalking the pigs. We had driven between him and the warthogs by mistake, inadvertently saving them, and then the leopard stalked off in what seemed like disgust moments later.

Another time we were driving along when a pack of wild dog appeared to our left chasing after something at top speed which turned out to be a hapless warthog. The pig made straight for our car and ran around it, causing the perusers to hesitate momentarily, which gave it enough time to escape completely. 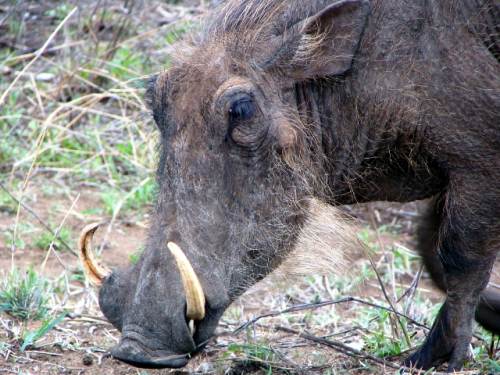