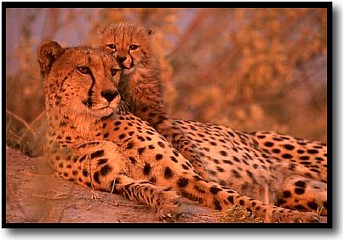 These wild animal baby pictures were taken at Selinda in Botswana using good technique and a lot of luck. It's not every day that you get to take baby animal pictures in the wild because the mothers are still pretty wary when they are this young.

Cheetah cubs are normally born in groups of around 2 to 6 and their eyes take between 4 to 10 days to open. On average they weigh about 10 ounces at birth and only one in ten of them will survive to full adulthood.

The photograph of the wild dog below show pups that are under a week old as their eyes have yet to open. There are between 2 - 19 pups per litter with an average of ten and the time between births is normally 12 - 14 months.

The wild dog pups are born in a den, usually one dug by an aardvark and all the members of the pack are involved in caring for the babies. They make excellent parents, even going so far as to make way for the pups to eat first when the pack has made a kill.

The litter normally comprises more male than female pups because there is only one dominant female breeding at a time and the males can help protect the pups and hunt prey. 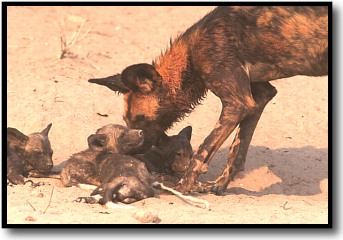 Best Time To See Them

Some species of animal have certain times of the year when they have their offspring and others give birth at any time of the year. The wildebeast and zebra in the Serengeti in Tanzania all give birth at around the same time in February, which is amazing spectacle when 200 000 new calves make their appearance.

The big cats have their babies at any time of the year, similar to elephants and giraffe.