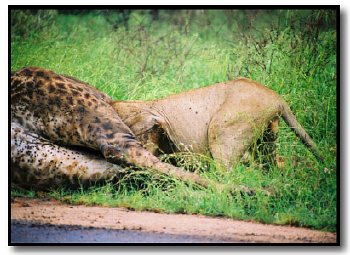 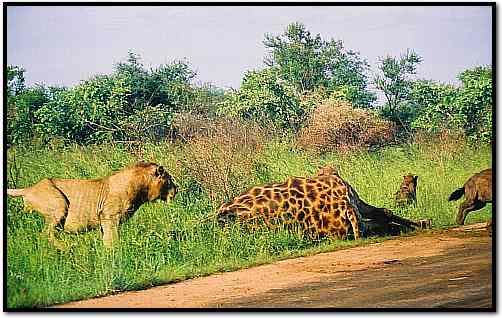 The Kruger Park in South Africa is one of my favourite places in the world. I have gone on safari there dozens of times and I always go back for more because I am never disappointed with the experience.

Stayed at Satara Camp in the centre of the park for three days and in the permanent luxury tents on the riverbank at Lower Sabi camp in the south for two days.

This is something I have never seen happen before and I have been on many safari trips over the years. Africa and it's wildlife are one of my passions.

The lions had killed the luckless giraffe the night before during a heavy downpour. According to the Rangers in the park, the lions have learnt how to make use of the rain to catch giraffe.

They apparently chase them towards the nearest tar road at top speed and then take advantage when the giraffe stumbles on the slippery wet surface. Amazing!

Next time you are in a game reserve and it rains during the night, there is a chance of finding a giraffe lying next to a tar road with a group of lions lounging. And that's exactly what happened to me. This is what I saw...

There was only one lion feeding when I arrived at the scene. One other (that I could see) was lying in the grass some way off from the carcass. I spent an hour or two taking in the scene and when nothing much happened drove to a lookout point about two miles further up the road.

Later on, I decided to take the same road back to swing past the lions again and it's lucky that I did because otherwise I would have missed what happened next.

Four Hyena, walking right along the road towards the kill. I followed close behind them for about half a mile.

When they came within visual distance of the giraffe, they became very cautious, but kept edging closer to the carcass all the time. The lions were nowhere to be seen.

The drive to eat soon overcame their nervousness. And when the first one had sidled up to the giraffe and started feeding they all suddenly became very brave and followed suit.

But they were still careful. They looked up and around between every bite and every now and then they would gnaw a piece off and charge into the bush to gorge on it there.

Two jackals had also arrived in the meantime but were keeping their distance and a hawk was circling overhead and would swoop down to pick up a hyena discarded titbit.

There were plenty of vultures perched in the surrounding trees but they were staying put. The reason why soon became apparent.

It started as a rustle in the long grass as a tawny body came gliding into view 15 metres adrift of the carcass heaving with hyenas, and then exploded into a full blooded charge to scatter the scavengers like chaff before the wind.

The king of the African plains had come back to claim his dinner.

I went back the next day and the lions were still there. They had probably beaten off more attempts by the hyenas during the night.

Back to the about us page or example top