Tsavo Safari Answers From the Experts

Tsavo National Park is one of the wildlife areas that forms part of the Kenya safari circuit. It's a little less well known so you can avoid the big scrum of visitors that sometimes occurs at sightings during the high season at some of the other parks. 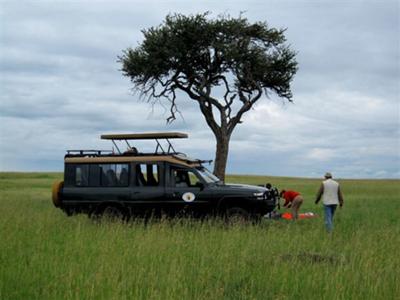 Wildlife and Birds To Be Seen

If you want to see elephant, then this is the place to be. There are masses of them here and a wide variety of bird life (over 500 species) and other game.

You can interact very closely with orphaned elephants (feeding and walking with them) at Ithumba which is a charity organization run by the David Sheldrick Foundation. They look after the orphans and attempt to re-introduce them into the wild.

And if getting off the beaten track and away from hordes of other tourists appeals to you, this is one of your best bets.

These Tsavo trip reviews give a good idea of what you can see and do there.

The rainy season is usually from March to May for lingering rains and short thunderstorms occur from October to December. If you visit during these times the landscape will be wonderfully green and lush but your movements around the park could be curtailed due to wet road conditions.

Accommodation - In the west there is budget camping close to each of the main gates at Mtito Andei & Chyulu. Kitana and Ngulia Safari camps have relatively cheap, one bedroom with bathroom and kitchen self contained units. In the east budget accommodation is in the form of Makwaja camp site and at Voi Gate, Kanderi Swamp and Aruba Dam.

At the top end of the scale there is the Kilayani Lodge, Lake Jipe Lodge and Finch Hatton's. In the east you can stay in style at Tsavo Safari Camp, Galdessa Camp and Satao Camp.

Size - This is the largest national park in Kenya covering 9,000 sq kilometres and 11,700 sq kilometres respectively. The west is the most developed, particularly in the northern area.

Most of Tsavo East is off limits to the public due to poaching, but the southern part is accessible. The reserve tends to get very dusty except at the end of the wet season when vegetation is green.

The best way to sort the wheat from the chaff is to find out what the safari company was like from people who have been on safari with that company already.