In the air hangs a rank smell of sweaty sodden socks. Outside it’s five degrees; inside the hut it’s three degrees warmer. As the thermometer falls, the gale blows relentlessly, whistling and whipping around the hut, battering the shutters.

Hunched over an iron brazier filled with glowing charcoals, the guide, our porter, and I sip properly scolding English-style milk tea from our blue thermos.

Even wearing all my layers, I still feel damn cold: our breaths steam as we discuss the next morning’s push toward the summit.

I trust my guide’s judgment implicitly. It’s only our second day together up on the mountain, only the third since I’ve engaged his services, but despite the fact that everybody and their uncle back in Nanyuki claims to be a guide, or knows somebody who is, I’d hired enough
guides in my time, to recognize his competence.

He’s been guiding on Mt. Kenya for twelve years and has summited it over three hundred times. No thanks to his crafty grin, I have confidence in his experience and his encyclopaedic knowledge.

Darkness spreads quickly over the snow-crimped peaks of Mt. Kenya where stars twinkle exuberantly against the blackness of a sky unencumbered by ambient light.

The night, though, has its own surprises in store for us, as if we needed additional excitement in the few hours we have for sleep before our two thirty wakeup call.

An unacclimatized British climber, who was to have made an ascent alongside my guide and I, becomes violently ill with altitude sickness: he must be evacuated to lower elevation. A rescue party forms. It’s decided that I’ll lose my porter and the Dutch climbers will lose one of theirs.

Finally, it’s down to just my guide and I: us, plus two bulging sacks of food, the tasteless tinned cheese, clanking cooking utensils (including the blue thermos), cold-weather gear, as well as the rest of our kit. Thanks to us having lost our porter, the summit attempt seems forfeited.

My guide, however, has other ideas. He refuses to acknowledge that retreat down the mountain remains a foregone conclusion, insisting on a three o’clock start for the summit. Drifting in and out, I have — maybe — an unsettled hour’s nap.

Twende: We go. The moon had already set. The southern sky is clear and the stars blaze brightly above.

We climb laboriously, in the weak light of a single torch: on and on forever, with no clue as to where we are or how long we’ve been moving.

I take care to aim the light at my guide’s feet. The pure hell of oxygen deprivation gradually comes into sharp focus: the affect of the altitude is startling. Plodding through the darkness, I feel exceptionally lousy.

My dull headache of the previous evening has degenerated into a merciless pounding, as though I’m suffering from a hangover, but without having the enjoyment of the night before. It’s the initial symptom of altitude sickness that I recognize all too well. I just can’t seem to be able to get enough air into my lungs to make it subside.

The air is so thin, so impossibly cold and dry, that every movement has become a chore; every step forward seems in slow motion and leaves my body drained: gasping for breath. My heartbeat accelerates. My panting seems entirely out of control. Concentrating on anything is nigh impossible.


After straggling disgruntlingly for about a kilometer, mostly along a fairly steady wide swath of scree, I must stop, overcome by a feeling of nausea.

The world shrinks until nothing exists except for the simple act of lifting each foot and planting it in front of theother. The only sound is that of our footsteps slithering in loose shale.

The darkness beyond the bobbing pool of light makes the shale seem endless and the torchlight assumes a nightmarish, hideously mute quality.

Only my altimeter paces our progress, though I refuse to steal glances at it too often because the numbers increase with painful slowness. There’s just too much mountain left.

The climb is relentlessly steep. The first hour hurts the most, but the going is tough all the way. Fighting for breath in the thin air, I pause every few meters, gazing up the unending mountainside, trying to penetrate the darkness with Herculean willpower, and indulge in a moment of self-pity.

Then I stare back at the ground and take another stiff step. And another. For every three steps, two breaths. Rhythm is everything, but it eludes me. The temperature hovers below zero, ice crunches under my boots.

As we go ever higher, the perilously frozen scree becomes utterly unforgiving. Patches of snow, mostly in sheltered spots, in between rugged boulders and cracks in the rock, make it seem that a single slip can send us tumbling back to the very bottom.

And it’s all too easy to lose our footing. As our thigh and calf muscles begin to burn, occasionally either my guide or myself trip, sending avalanches of pea-sized pumice pebbles sliding into the precipice. Dislodged, they fall for interminable, silent minutes, often landing as noiselessly as they had fallen.

The slope is barren. No green thing grows anywhere. Nothing would arrest our tumble. Near dawn, we reach a boulder field. It’s a tricky scramble, made all the more tricky by a layer of frost, especially in the dying light of my torch.

There are a number of places where we have to hoist ourselves up over lava rocks. It’s probably only because we realize we cannot afford to slip that we don’t.

After a long rest to recover, I decide I feel terrible, I have no strength left, I cannot move, but knowing that we are well past the point-of-no-return forces me to continue. Being this close, we can’t turn back. Not now.

Reaching down inside and gathering up my energies, I deliberately press on after my guide, on towards the peak. I am climbing only on determination. Or maybe on adrenaline.

The last scramble takes us over a meter-high ledge from where it’s a few meters to the sharp-tipped summit marked by a metal Kenyan flag bolted to some white painted rocks. We make the final steps to the highest point.

Then, as I lurch there on uncertain legs, a satisfied grin on my face, drinking it all in, the nightmare of the ordeal is already fading. My exhilaration feels clear and pure. Not even the biting wind whistling through the cracks can dampen my spirits.

Stunned by my achievement, I’m swept up by overwhelming waves of elation and accomplishment. It’s fifteen to six. We have made it. I had done it! 4,985m: the roof of Africa!

From a pitch black night brightened only by the Milky Way, the distant horizon to the east begins to glow brighter, turning from black to pink. On cue, the stars fade and disappear. Then — in a quick heartbeat — the sun rises over the rolling foothills, a red ball of fire above the clouds.

It’s absolutely sublime. The details of the highlands around in every direction come into focus while warm light floods the sky. The colors are strangely different: effervescent.

The mountain speaks with the wind whistling over the defile, even as an enormous silence fills the air. Huddling from the gusts, head down with the cold stealing into my joints, I watch the sun continuing to rise, becoming brighter and brighter, illuminating more of the forbidding scenery as its rays edge along vast tracks of nothingness.

A quilt of clouds blankets the lowlands surrounding the mountain, gives the impression of Mt. Kenya sheering out of an endless sea of cloud, above occasional archipelagos of distant low bluffs. They stretch featureless and forever, in a kind of cinematic overlay.

Gentle bald saddles roll down with glaciers and snowfields snaking down beneath my feet, ancient rockslides carved into their sides. Morning light glistens on equatorial ice. Crystalline streams meander across boggy valley bottoms.

New, angry, jagged cliffs jut upward, towering in stark relief against the sky like ramparts from some book of apocalyptic fables. On the summit, the line where basalt rocks meet the sky is sharp: crimson against blue, electric blue so intense it appears to be internally illuminated.

Shipton’s Camp is but a dot far below. We’re atop the second-highest mountain in Africa; it doesn’t look possible to have been able to climb so high in a mere three hours.

On a canvas too grand to take in at once, the views in every direction are, quite simply, the most splendid I’ve ever seen in my life.

As the full scenery unfolds in front my tired eyes — the sheer face that we’ve struggled to conquer, all red in dawn’s first light, the rubble-filled gullies still obscured by shadow, the yawning expanse of saw-toothed ridges melting into the far-off distance — only one thought occupies my oxygen gasping mind: Is it not wonderful to be alive?

My guide and I shake hands with no words between us. None are needed. 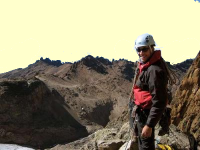