Sunrise view from one of the camps After volunteering with Wildlife ACT in 2009, I was able to join their team as a long-term volunteer for half a year in 2013.

There was no way I was gonna let such an amazing opportunity slide, so I put my medical studies on hold for a semester and – as expected – had the time of my life!

Wildlife ACT are a conservation group focused on Wild Dogs, Rhino and Cheetah.

They provide monitoring services to game reserves around KwaZulu Natal that don’t have the necessary resources and expertise to do so on their own and offer volunteers the chance to work alongside their monitors and take part in all aspects of the conservation work they around the reserve.

It was a fantastic experience, and there wasn't a dull moment during the daily tracking of Wild Dogs, checking camera traps, monitoring Rhino and all the great wildlife sightings in between.

I spent time at all of their project sites, including Tembe National Park, Mkuze and Hluhluwe-iMfolozi Game Reserve.

Joining an organisation like Wildlife ACT, to me, is the best way to go on safari. Research vehicles are allowed into areas of the reserves that you’d never get to see as a normal tourist and the knowledge of the monitors far surpasses that of most guides.

And obviously I wouldn't have had the chance to assist in several Wild Dog relocation's, fitting collars on Wild Dogs, Cheetah and Lions and be part of a massive Buffalo Tb-testing operation!

The insight you get into the inner workings of conservation, as well as anti-poaching efforts and research is what would make me go for a volunteering trip instead of a normal safari every time!

It’s definitely not a luxury holiday and their saying "this is Zululand, not Disneyland" certainly fits – the camps are basic, kitchen duty is shared and the day starts ridiculously early – but to me, that’s the best way to experience the African bush.

It is Zululand after all, not Disneyland, and that way there’s no chance of confusing the two :)

Also, a set up like this almost guarantees you a set of like-minded travelers as your camp mates, and to me, the company in which you spent your time is so much more important than where you sleep at night!

I met so many wonderful people from all over the world and will remember some of the discussions we had and the experiences we had together.

And when you’re sitting around a fire which a great bunch of people after a nice braai, listening to the lions roaring around camp, it doesn't really matter whether you’re sitting on fancy leather seats in a 5* lodge or on self-made chairs from wooden crates!

All in all, putting my „regular“ life on hold in order to spent this time in Africa was the best decision I ever made, and I can’t wait to go back.

The Wildlife ACT team really are a fantastic bunch, welcome everyone into their team with open arms and gladly share their passion for the African bush and its incredible wildlife. 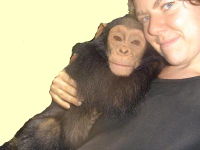 Join in and write your own page! It's easy to do. How? Simply click here to return to Volunteer .