On the Machame route, the route from Shira to Barranco, especially the area near the junction to the Arrow Glacier route is the toughest (other than the summit night) and this is where you'll really feel the thin air. If you make it through here okay, you'll probably be okay for the rest of the climb.

Ok, breakfast was basically, we'd start with tea - ginger tea for those who were taking, just normal tea afterwards, that was served in the tents.

Then we actually came out to the mess tent. I think typical breakfast was eggs, sometimes scrambled sometimes boiled, frankfurters, porridge, toast, some fruits and fruit juice.

I hope you didn't have to carry all this stuff!

Dinner was varied, the tea was the only thing was standard I think in that dinner. Sometimes we had veggies and rice, sometimes meat, then there's something called ugali, it's a local dish.

During the day we were basically drinking water, sometimes we'd have some sports drinks/energy drinks, but of course we ran out of those within 3 days so basically more water.

I used to go to the gym once or twice a week. I did some jogging also - not very far though - like once a week.

Two weeks before we actually went to climb a mountain, not very high - about 2900m - just as a preparation. We actually had a great time on the crater it helped a lot. So it helped both physically and mentally.

The weather was not too bad, on the first day there was slight rain in the rainforest.

As we climbed, it would get very cloudy and cold, but no rain. Then on the mount Kilimanjaro summit night, because the guide told us we were quite lucky, cause the wind can get very strong. The weather was generally o.k., 'cause we only encountered rain again on the descent route.

I would wake up 7 o'clock; tea's served in the tent, then breakfast roughly 8 ... no, ok. After that we prepare our stuff, pack the sleeping bags, get our stuff ready for the day, then breakfast 8:30.

Then just lazing around, we usually start walking at about 9:30 and we were actually walking at a very slow pace, so we were basically walking and chatting. Lunch breaks - generally we were breaking for lunch at two, then get to camp in the evening, then you try and clean up without much success. That was one of the hardest parts, then doze off a bit.

At 7 o'clock we'd go back to the mess tents, wait for supper, play some cards, tell stories. Then supper - you’d generally be through your supper by around 9, and then after supper you go to your tent and go to bed. People were suffering getting sleep; I didn't get any sleep myself.

You struggled to sleep? Was that because of the cold do you think, or what would cause that?

No, it wasn't the cold because, I suppose I was just nervous.

We went to bed at 9 and they woke us up at 11, I had not slept at all. That was also what I presume to be the coldest night, but I didn't sleep there. The other nights weren't that cold, other than Shira. Shira was very cold.

Many people say that the toilet facilities on mount Kilimanjaro aren't that good. What's your opinion?

Yes, those are terrible. They were not good at all. But maybe, I suppose for someone from Europe they'd find it worse. Here in Africa, we see those all the time, I guess. We don't get that much affected even if we live in the city.

But yes, I can imagine it can be a traumatising experience for some. Yea, they are not good. That is true. I don't know about the Marangu route, but on the Machame they're not very good.

1) Fitness pays. I'm probably fortunate in that I live at 5,500ft above sea level but some of my colleagues who live in Nairobi suffered because of not training enough.

Mix up the training. I only trained for 1.5 months but mixed aerobics, treadmill, occasional jogging & squats with weights (for leg strength). 4 times a week is sufficient. Running up stairs is difficult but is the best preparation if you can.

2) In your training, practice breathing through your nose, however hard it may be. This'll pay off on the mount Kilimanjaro summit night when it'll be child's play breathing though your mouth. I even had energy to sing along with the guides!

3) Keep off the booze if you drink, 1.5-2 months before the climb. It'll pay off and it helps you gain the fitness.

4) Have a massage the day before departing. It'll relax you a great deal.

5) Climb in sneakers until base camp as it's easier on your feet. Save the boots for the summit night.

6) Do not underestimate the conditions on the mount Kilimanjaro as many often do. Good sleeping bag is essential.

7) Pole, pole (slowly, slowly). This is oft-repeated about mount Kilimanjaro but is absolutely essential. However fit & energetic you feel, walk very slowly and conserve your energy for when you need it, on the treacherous scree to Stella Point. Avoid exerting yourself completely.

8) Carry a day pack as it helps you with balance. At all costs, do not carry your own main pack but hire a porter, else you won't make it far.

9) Clear & copious urine is the watchword. However, it is not the most interesting thing having to leave your sleeping bag and frozen tent to go to the toilet at night.

Therefore, start drinking your 3-4 litres even before breakfast and aim to have finished with drinking water before you get to camp. It'll save you the agony at night (and contemplating taking a leak in a mount Kilimanjaro water bottle rather than face the cold like I did).

10) Do not overdress during the summit night as many layers weigh you down (the guides say they don't allow your body to breath through all its pores) and you may actually have to remove them because of overheating but your guide may not be with you (but with other climbers in your party) when you need them from 3am when the wind starts blowing and the biting cold sets in.

Wear as many thermals as possible (I had 3 layers of thermal tops, 2 fleeces & a jacket - but we climbed in the warm season so this may not apply throughout the year).

11) Do not use ski poles on the summit night. It exposes your hands to the cold while they should be tucked nicely in your jacket. Hands and ears are the most susceptible parts to the cold.

12) Carry a normal torch for using around camp. Save the head torch for the summit night (but check beforehand that it works!). 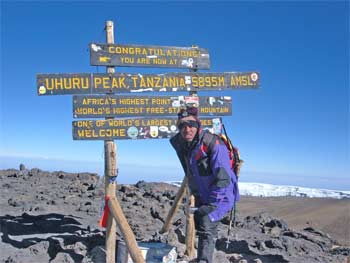 What would you say was the most useful piece of equipment you took with you to climb mount Kilimanjaro?

We had poles, didn't need them, actually the guide advised us against using poles. He told us that poles actually make you tired and on the summit night especially, your hands are exposed.

What he said is the best thing is to actually have your hands in your jacket pockets, you don't need the poles. We didn't use them, we hardly used them on the descent.

Sneakers for the days before the mount Kilimanjaro summit, because I only used boots on summit night and thermal clothes, certainly.

So you wouldn't think it's necessary to use hiking boots before you get to the summit?

If the weather's not very bad, it's better to use sneakers because they're easier on your feet. As long as they're good, it's actually much easier. One of my friends wanted to use them up to the summit but he was advised against it (laughs).

Did you or anybody else in the group have any problems with the altitude at all?

No, not at all. The altitude didn't cause any problems. One of the members though had a problem with the water, he got stomach ache on the summit night.

There are a number. The view of Mt Meru; then, being above the clouds especially on top of the Barranco Wall and of course, Uhuru Peak. Those are my highlights.

Sounds like an amazing trip. How would you rate it overall then?

Well, it's like nothing in this world, it's out of this world. If you've not climbed mount Kilimanjaro, you should try it. 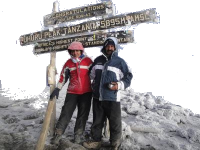 Back to the Kilimanjaro climb page or top