We stayed at Bakubung Bush Lodge on time-share, I go there every year. The time-share section accommodation are separate thatched chalets, little bungalows with en-suite facilities. The lodge isn't only for time share holidays - it's also open for "normal" bookings.

All the accommodation is arranged in a half circle and it has a hippo pond in the middle as the focus point just on the other side of the fence.

It was excellent. I recommend Bakubung Lodge to others, definitely.

The time-share units are self catering, so we normally just have a braai [BBQ] in the evening and bring our own food with.

But there is a restaurant.

It was good, we had no rain. 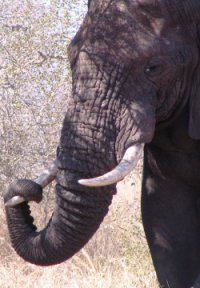 We saw warthogs and some small antelope (I think they were bush buck) from camp, at the hippo pool.

We went on some game drives organised by the lodge which were really good. We saw a lot of wildlife ... elephants and everything. They also supplied some cool drinks on the drives.

Then they have night drives ... we went on one and saw a cheetah, some lion and the usual diurnal animals like elephant and giraffe.

How was the guide?

Very good. He was quite knowledgeable.

How big were the groups on the drives and what vehicle(s) did they use?

It was a large open sides vehicle, and there were about 15 people on it.

What would you say was your wildlife safari highlight?

Probably seeing the cheetah on the night drive, you don't often see them.

We'd get up, have breakfast and then go to the poolside to read a book or something.

Later we'd maybe go to the restaurant or have a braai and then go on a game drive at night or in the early morning.

A good pair of binoculars.