Monique works in the travel industry and went to Sabi Sands for her first African safari. I had an informal telephone interview with her to find out what she thought of three different five star lodges there... 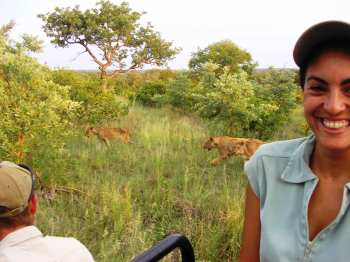 I went to Singita Boulders Lodge for two days. It's absolutely amazing. And then I went to Londolozi and Sabi Sabi after that.

How did each five star lodge perform? Was there anything special you liked about their service? 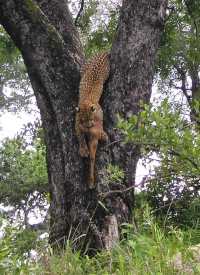 SINGITA was brilliant. Everything was perfect. From the time you got there ... the attention to detail and the attention that they gave you ... I mean they make you feel that you're really really special.

I liked everything about their service, there was nothing I didn't like. Even the quality of their product - they use Dermalogica in the rooms - was just fantastic. Everything was fantastic. I was sad to leave.

SABI SABI: I was quite disappointed when I went there because apparently they're supposed to be quite good as well, but they were terrible. It was really bad.

Singita gives you all your beverages and things for free - they don't do that at Sabi Sabi. They don't have that quality of product in the rooms - the shampoo, you know that type of thing, the little things that people always look at. Even at dinner, the staff just don't pay attention to you. You don't feel like you're being looked after. I was actually very disappointed.

So you wouldn't advise people to go to Sabi Sabi?

Actually although I was very unimpressed, I have to admit that if a group wants a five star lodge but they can't afford the Londolozis then we obviously send them to Sabi Sabi. Also because Sabi Sabi is kid-friendly.

LONDOLOZI was also very good; it was very nice. The service was brilliant. A lot of baboons and mischievous monkeys! You have to keep your doors closed.

Not as fantastic as Singitaâ€¦ they should have really put me there [Singita] last because I compared everything after that to Singita.

They did something really nice: the drinks stop that they did was a surprise. The guide said, "There's something there... I think it's a fire. Should we go take a look?" We looked and saw this light, and when we got there, there was a waiter, this whole table that was set up and candles and champagne â€¦ that was really nice, I thought. That extra special touch.

And the general manager would dine with us at times - that was nice.

They really went the extra mile.

How was the guide(s)?

Our guide at Singita was fantastic; his name was Sean. He was brilliant. Not only was he good looking but he was brilliant, very clued up. And he knew a lot of the local language as well. Our tracker was a black guy who grew up in the area; they were obviously able to talk to one another.

At Singita it was out of this world! Unfortunately I couldn't take my partner with - and there was no cell phone reception and I kept thinking I just want to call him and say, "I wish you were here"! 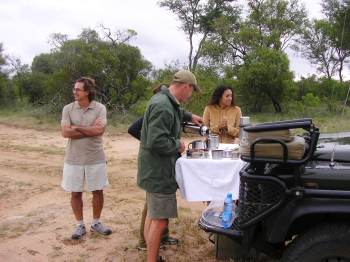 It was awesome. Boulders is very big, it's like a family lodge so it was just myself in the room and then there was another room there. You've got your own dining area. It was awesome, everything was beautiful.

It had a splash pool outside, and an outside shower. It was gorgeous, seriously gorgeous.

How many people were thereâ€¦ was it quite full during your stay?

We were about 10... no locals. I was the only local, the others were all international visitors.

Did you fly in or drive in?

I flew in with Federal Air. They've got a landing strip there and the guide waiting for you in the 4x4 and then he takes you through to the five star lodge. They've a got a very nice reception area around the Landy pick-up.

At Singita, breakfast was a buffet so you could choose whatever you wanted. They come around to you in the morning and they offer you eggs and sausage or whatever you want and then they make that for you then the rest was buffet like cold meats, cheeses and that type of thing.

And you get your own personal butler - from the time you get there. They say this is your butler and he's there and he's the only person that tends to you. So for all the early morning teas and the afternoon teas, he comes to you and asks what you wantâ€¦ that type of thing.

Ah, I was amazed at all the food!

Unfortunately I went to Singita first and afterwards I went to Londolozi and after that we went to Sabi Sabi as well. So, they started me off with the best! So after that, nobody else could keep up!

At Londolozi, the food was excellent.

I saw elephants from the air, because one of the foreign people in the plane pointed them out.

At Singita, we saw so much game. We were really lucky! We saw everything! The highlight, I would say was the lions, because I've never been that close to lion, and it was a whole pride of lions. To me, that was quite awesome.

We also spotted a leopard during the day and then in the evening we followed a leopard and she had a play in the tree. For a first time, we saw a lot of cool things.

At Sabi Sabi, it was also very good. We had very good luck apparently, because we saw at every place we went - even at Londolozi - all the game that you could see.

Would you say you were satisfied with the amount of wildlife that you saw?

Definitely. Yes, I was astonished by the amount that I saw.

And on the safari drive itself, they give you sundowners; they have a drinks stop. Then you go back to the lodge and they give you dinner.

I think it was probably my sunscreen.

Did you take any anti-malaria medication?

No I didn't. I sprayed myself with Tabard.

Did they provide you with binoculars?

No, you're advised to take your own. You've got the guide that's got a pair and if somebody doesn't have, you can use his. But they don't provide you with anything.