After our game drive and breakfast we head back to the Chitabe airstrip for our 20 minute flight to Khwai River Lodge in the middle of the Moremi Reserve. Botswana does not have roads so you must fly between camps.
Here the tents are air conditioned (even with mesh windows) and it is heavenly cool.

Much of the year, this vast plain is covered with blue water that comes down from the Angola highlands.

Instead of flowing into the sea, as most rivers do, it spreads out onto the Kalahari Desert and sinks in to the sand creating a maze of pans, channels, lagoons and islands dotted with trees.

This is the dry season so it looks like a vast wasteland with felled trees and brown grass. After the first rain it will spring like magic, almost overnight, into a green carpet, but now it looks like a petrified forest.

The yearly flooding and receding water kills some of the trees and the eles push down the others to release aggression or eat a ring of bark that deprives the top of the tree of nutrients, so it dies. Eles can kill an entire forest in a few days, so some trees have learned to give off tannin that repels elephants.

On our transfer to the lodge we saw two big black maned lions, one of them with an injured leg and blood on his ear. It must have been a terrible fight as he cannot walk without a serious limp.

His buddy left him so he painfully got to his feet and limped away whimpering and crying in pain for his friend. If he cannot heal quickly so he can hunt for food, they will both be vulnerable to losing the territory to stronger males.

The Khwai vehicles have three individual padded seats that are more comfortable than the bench seats of Sandibe. We are 6 in a 10 passenger vehicle - what luxury!

We are all becoming birders because they are so colorful and exotic. Who would have thought it?

The lilac breasted roller is a rainbow of purple, pink, yellow and aqua. It is difficult to describe a bird like that until you see it - which can also be said for the whole of Africa.

Writing for this journal I wonder if our grandchildren will have the means to awaken the sleeping heart of this Dark Continent. I am most at home away from home and business and here the majesty of Africa spirits me away like tumbleweed.

I find myself between heaven and earth - almost in an alternate universe. I listen when silence speaks, I dream when others are awake and I feel like my adventure is the first discovery. When I return home I have memories to last an eternity.

It is not yet 7:00 am and we have seen a herd of cape buffalo and a journey of giraffe. By 8:00 am we watched as a leopard and a hyena stalked each other vying for the leopard's kill.

The leopard won the battle and ascended the tree where the rest of his kill was stashed to nibble with dainty bites, but the herds of antelope below went about the forest screeching their alarm call to warn the other wildlife - danger, danger, predator near!

When the leopard was full she strolled about and finally found a termite mound where she stretched languorously and posed for our cameras like an elegant long legged model.

On the game drive tonight we saw vultures circling overhead. Then the radio crackled and Johnson shouted back to us "Hold on", as we were off like a shot. We are looking for the kill. There is nothing like it for us hunters.

It is dusk and quickly becoming dark as we look for trampled vegetation. Our tracker leaps off his fender perch to look for dung. If it is steaming warm we are close. Conversation is hushed until we finally come upon it, but the chase is over. The wild dogs took down the young giraffe seconds ago.

And then we shot it again. Everyone did it, like we were soldiers of fortune bringing back our spoils of war as evidence of our prowess and power. But unlike Winston Churchill and Ernest Hemingway we were not bringing back trophy heads or hide rugs to decorate our floors. We are bringing back our visual trophies in high definition and digital color.

Our coffee tables are heavy with photo albums of safaris. But no discovery channel or travel brochure can capture the thrill of the chase, the kill and the shooting.

It is an experience that cannot be portrayed but must be seen, heard and felt - the cloud of dust surrounding the kill as the dogs vie for best space, the crunch of the bones as they eat, the smell of blood and entrails and the furious snarls as the predators spar over and over for the choice dining spot.

It is survival of the fittest and the way of life in the bush. Some must die so that others can eat and survive.

It is not that we are blood thirsty or love violence, but we are predators who rarely kill own food. Maybe there is a missing connection with some part of our early existence.

« Previous part of this trip 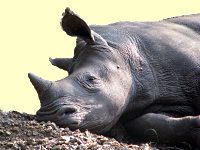