Wendy went on a double back-to-back Southern Africa safari: first Zimbabwe, then Botswana and finished her Africa trip off with a few days in South Africa. I had a chat with her on the phone to find out how it went:

Gecko's Grassroots Adventures for both tours, on two pre-designed safaris.

First I went to Zimbabwe on the "Wild Africa" safari, and then to Botswana on the "Untamed Botswana" safari.

The group size was about 14 people... might have been a bit more, actually.

How did Gecko's perform?

The first part of the tour (Zimbabwe) was great.

But the second part (Botswana) was pretty disappointing. I don't know why, I'm not quite sure. Maybe we moved around too much. We usually spent just one night at each camp.

In Chobe we went on a river cruise and we were told we could take our alcohol, which we did. But there were no glasses and no toilets. So that was a bit of a silly thing to do.

One of the drives (while in Botswana) was all dirt road and we drove for 6 hours and saw absolutely nothing. Just dirt and driving through supposedly a reserve. This was on a vehicle with no sides on it - it was absolutely freezing and there were no blankets to try and keep us warm. There was nothing to see, it was dusty and very uncomfortable. So that just spoilt it a lot for us.

How were the guide(s) and the vehicle(s) during your southern Africa safari?

The guide for the first (Zimbabwe) safari was great.

The only criticism I have is that the guide sat down in the cabin of the bus with the driver and not upstairs with us. So we didn't know what we were passing - there was nobody telling us what was going on while we were passing everything.

In Botswana we had a bus for a while and then we went to a couple of other places and changed vehicles. I think when we went through Chobe we had a different tour guide … he was a local guy.

For the Okavango Delta we used a big truck that was open-sided and it was absolutely freezing. Freezing in the morning and freezing at night.

For the first (Zimbabwe) safari, we started from Jo'burg (South Africa) to the Great Zimbabwe Ruins. From there we went to Antelope Park which was incredible. Next it was Matobo National Park which was quite interesting.

Then we reached Victoria Falls which was pretty good too. Just standing, looking at the Falls we got quite wet from the spray. Some of the others in the group did river rafting the first day.

The second part of my southern Africa safari (Botswana) started in Vic Falls, from where we went up to Chobe Park, Savuti and Moremi Reserve in the Okavango Delta.

Did you have problems getting petrol and that kind of thing in Zimbabwe?

We camped throughout the southern Africa safari.

We had to do our dishes on the first trip and we had to obviously set up our own tents and take them down and everything.

At Antelope Park, you can put up your own tent, or you can have a cabin or you can upgrade to a river tent. The river tents were amazing. It's just like a motel room except the walls are made out of canvas. So you had flush toilets and that. We spent 2 or 3 nights there and I upgraded one night.

The second part we didn't have to do anything to help with the food.

In Botswana the chef was actually incredible, the meals were unbelievable. We had bacon and scrambled eggs, we'd have cereal. For dinner we'd have roast potatoes and chicken, he was just an amazing cook.

In Zimbabwe it was good but it wasn't as good as Botswana. To be honest I can't remember what we had for breakfast, I think we had a yoghurt and muesli maybe. Oh, we could have toast, that's right. Sometimes we had eggs, but not very often.

The days weren't cold, but the nights were unbelievably cold. Two sleeping bags and I was still cold. I wasn't expecting that at all on a southern Africa safari.

Matobo Hills was quite interesting, but not terribly exciting. I think we did a rhino walk that same morning and I think it's the same park, I'm not sure. 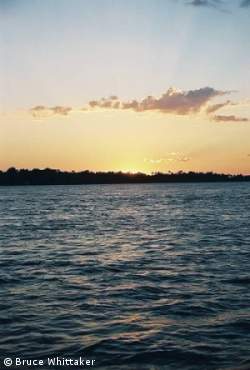 In Botswana we went on a cruise just for a few hours. We saw elephants and some hippos.

We did see some game in Botswana but I guess really what we all wanted to see was lions and we didn't see any. We didn't see any wild cats at all - we saw no cheetahs, no leopards and no lions. So it was pretty disappointing.

It was disappointing because the whole reason I went on a southern Africa safari was to see the prides of lions and I didn't see any.

The Delta itself was pretty interesting although the only wild animal we saw was an elephant.

We went on the mokoro trip but saw no animals while we were on the canoes. We were very unlucky, I think.

What would you say was your wildlife highlight of your southern Africa safari?

The lions don't have leads or anything. They just walk next to you and wander off, go play a little bit. You can have your photo taken with them and sit next to them and, they were incredible. We'd take them for a 2-hour walk morning and afternoon.

That was my highlight and when I left the tour I went to Boksburg (Johannesburg, South Africa) and spent a couple of nights there in a B&B and then I went up to the Rhino & Lion Nature Reserve and I got to play with lion cubs that were only 4 months old and that was just incredible as well.

Anyone going at the same time as me and they're going up to the Delta: make sure you take super warm clothing because my tent mate - you know the person I shared the tent with - had my thermals and her thermals on and she was still absolutely freezing. She had a beanie on, a scarf… and as I say I had two sleeping bags. It wasn't just cold in the Delta, it was once we sort of got up into Botswana that it was really cold at night time.

Are there any special items one must pack?

Only if they go up to Victoria Falls to take stuff to trade like pairs of shoes, or t-shirts or shorts… anything they don't want, just take it to barter with because they're so poor, it's just so sad.

The first tour was fantastic, probably a 9 out of 10.

The second tour was probably a 6½ out of 10. But I wouldn't travel with Gecko again. I was hoping to get a whole lot of international people on my tour but they were all Australian. I didn't want to go and meet more Australians.

I think if I'd gone to Kruger Park I would have seen all the animals I needed to see and lots of lions. I didn't go there and I think maybe a day at Kruger would have been a good thing to add to that Gecko tour. The first part as I say was good but the second one just put me off.

I want to come back and do Kenya.