During the evening boat ride at Chobe we saw over two hundred elephants at one time. It was one of the most amazing things I have ever seen. They would come down the hill and into the river in herds of twenty to fifty and just frolic and play.

There was one young calf that kept plopping down in the mud and getting stuck. The older elephants would help him out and he would run right back in and get stuck again. We watched the sun go down and took some amazing photos of elephants against the setting sun.

I looked at many companies, on the internet, when I began planning and they were one of several that offered the kind of safari I was looking for. I wanted to do participation camping because my daughter and I had done that in East Africa, about five years ago, and loved it.

I emailed a number of companies and explained what I wanted and Jenman Safaris was not only the first to respond but they offered a number of suggestions that proved very helpful. I checked them out on every web site I could find and heard only good things (well, with one exception) then sent them a suggested itinerary. They responded with what I believed was an excellent price and the planning of details followed.

The entire experience was wonderful. For over a year, during the planning, they responded to every question and concern in a timely and helpful manner. We made several changes to the original itinerary, at their suggestion, and the safari proved them right in every case.

We did do a participation camping safari (although we spent some nights in lodges) and the Jenman equipment was great. The tents were in good condition, the sleeping bags clean and warm and the food trailer was wonderful. We had cold, or at least cool, drinks all the time and the food preparation was very organized.

We had only one minor hitch in the whole safari and that was the failure to make a hotel reservation in Johannesburg for our last night. Jenman caught their mistake and we worked things out with no real problem.

The biggest problem we had was not Jenmen’s fault. The airline lost my wife’s luggage and we had to go shopping (what a terrible ordeal for a woman) because the luggage didn’t catch up to us for ten days.

Our guide, Chauntel, was great. She was very knowledgeable and had prepared well for our safari even though she had not been to all the places we visited on a regular basis. Her game spotting ability astounded us.

She did a really good job with meals. The food was plentiful, well-prepared and tasty. It amazed us how she could drive all day and then put together a great meal in the time it took us to set up camp and wash up.

When we met her, in Lusaka, she had a suggested revision to our safari that made a major difference in the canoe trip, on the Zambezi, and greatly enhanced our experience. I am 65 and my brother-in-law is 63 and yet we didn’t mind being “bossed around” by a 29 year old so that tells you something about her people skills. 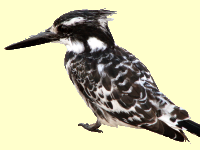 Join in and write your own page! It's easy to do. How? Simply click here to return to Botswana Safaris.