The only thing that didn't live up to my expectations was the scenery and wildlife in Amboseli although this was totally down to the drought and nothing that anyone could do anything about.

The whole holiday was fantastic. Gamewatchers was totally professional throughout and did everything possible to meet our expectations.

We were on a mobile camping safari which brought us as close to nature as you could possibly want to get.

Camping in small dome tents with only a layer of canvas and a thorn bush fence between us and the wildlife, felt like a true adventure.

After a day out game watching in the 4WD land cruiser, we would sit and watch the sunset before tucking in to a fabulous three course evening meal under the stars. There we were in the middle of the African plains, enjoying such delights as home made soup with freshly baked bread, roast potatoes and apple pie. Then we would sit around the camp fire and recall the highlights of the day before turning in for the night.

The staff to guest ratio was 1:2 with our own cook, driver/guide and assistant and help was always at hand when you wanted it.

In the field our guide knew exactly where to look for the wildlife and what it was we saw. We were extremely lucky to get such close up views of the big five.

The first stop was the Selenkay conservancy, a very dry camp site but with the tents already pitched and with open air showers constructed. There was a thorn bush fence around the camp assuring us that it would keep us and the wildlife separate. We had two nights in Selenkay from where we explored the local area with good views of Kilimanjaro and then into Amboseli.

The second camp was at the Kigio conservancy on a grassy plain with plenty of places to set up the tents to appreciate the views. A perfect spot to watch the sunset and close at hand to Lake Nakuru to witness the spectacular flamingos.

At the final camp site in the Siana Springs conservancy we switched to larger two dome tents which were already set up. The conservancy bordered the Masai Mara and we were only 10 minutes away from the park gates allowing us a full day of game viewing.

The food was great and the cook was happy to cater for me, a non red meat eater.

Breakfast started with a platter of fresh fruit, followed by a selection of eggs, meats, mushrooms, beans, toast and unlimited amounts of tea and coffee.

Lunch was generally taken picnic style but again, always freshly prepared each day and of a wide enough variety.

We didn't get the chance to try any traditional African food but after watching the Masai mix the milk and blood I was happy sticking with the roast chicken.

It would probably be easier to list what we didn't see; the Mara exceeded all expectations.

Each day brought a different highlight with some great encounters with the elephants in Amboseli. Unfortunately the drought over the last three years meant the area was not as green as you would expect which has taken its toll on some of the animals.

At Lake Nakuru we had great views of the flamingos and the chance to get out of the vehicle and almost get within touching distance of them. We also got up close and personal with a couple of rhinos which was a real bonus.

The real highlight of the week was the Mara which was absolutely brimming with wildlife from antelope through to zebra and everything in between. Just sitting watching lion cubs dozing in the sun had us transfixed but watching a lioness stalking zebra had us on the edge of the seats. Unfortunately it came to nothing and the zebra had a lucky escape.

Everyone always talks about the thrill of the migration and as we sat at the edge of the Mara river with thousands of wildebeest and zebra gathering in the dust around us I could appreciate what all the fuss was about. Suddenly the first of the animals descended into the river and then there was a mass stampede as they reached the other side and signalled the all clear. For most it was a successful crossing, however, there was at least one which we witnessed being dragged under, never to be seen again.

The real highlight of the trip came on the last full day in the Mara, just as the sun was starting to set. We were given some information from another guide that there had been a leopard sighting nearby and we excitedly headed along the dirt track to see if we could catch a glimpse. With the light fading fast we came upon the beautiful beast, standing proudly over its prey which was spread eagled over a tree branch. The cameras didn't stop clicking for the next few minutes. A truly magical way to end an incredible week. 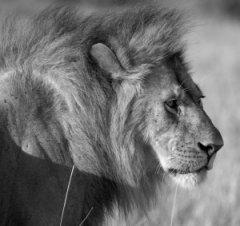 Tea was usually served as the sun started to poke its head over the horizon and would be shortly followed by breakfast. We usually had a briefing of what the plan was for the following morning, after dinner each day, so we would all be ready with cameras packed and water bottles filled.

If we were on safari we would set off after breakfast into the park for a day of game viewing. If we were moving between camps we would help to break down the camp, load everything into the trailer and then set off.

We generally took lunch as a picnic out on the plains. If we were game viewing we returned to camp just before sunset with time for a hot shower before dinner.

After dinner the night was young and as long as there was firewood, we would sit around recalling the highlights of the day.

Apart from the safari we managed to fit in a visit to a Masai village whilst we were in the Selenkay conservancy which gave a great insight into Masai life. Certainly well worth a visit.

Think about something warm to wear in the evenings or for those early morning game drives. It may be Africa but we had temperatures of 6&#176C one night. I would take another fleece next time.

Think about hiring a zoom lens for your camera if you haven't got one. I found it hard to justify the cost of hiring a 100-400mm lens before I went but having seen the photos I got, it was more than worth the money.

You do spend a long time in a vehicle, it is worth making sure the one you choose to go with provide decent equipment.

Camping may not be perfect for everyone but this was my dream holiday. The overall experience was just incredible, far in excess of what I had expected and if I had the chance, I would go back tomorrow. It was one of those magical holidays you wish could go on forever.