The Animals and People of Africa

The tree climbing lions were an amazing highlight of our safari, four lazy ladies lying in the same tree. Very cool because apparently you don't always see them, even my guide hadn't seen any in about 2 years. 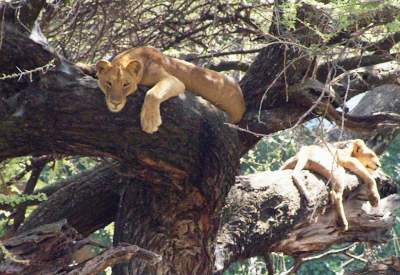 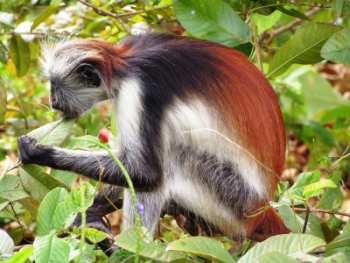 In the lodges/hotels, there were buffet-style breakfasts and dinners. There was always a good variety of food (which is necessary for a vegetarian like me). I love to eat and never went hungry. I loved the variety of fresh fruits and vegetables.

Many of the places even offered to make something special if I couldn't find enough vegetarian food at the buffet.

I did a lot of reading and research into different companies beforehand. Many companies sent me literature or websites to peruse but Another Land was the only company that made personal contact with me.

They asked me right off the top what my interests were so they could prepare an appropriate information package for me. They kept in constant contact with me and I knew early on that they were the company for me. I booked everything through them.

Another Land is an amazing company. I am travelling with them again in the summer of 2007 when I go to Uganda, Rwanda and Kenya. I should then see some new animal species and meet a different people of Africa.

The thing I like the most about them is that they are accessible. They keep in close contact and answer questions in a timely manner (and trust me, I always have LOTS of questions). They really want to know what your expectations are and where your passion lies. They tailor-made the trip based on the information I provided about myself and what I wanted from this trip, for instance visiting people of Africa in a traditional village.

It was a special trip for me because it was the 1 year anniversary of losing my husband to cancer. It needed to be perfect and it was. I was also a woman travelling alone so they insured that everything was safe amongst the animals and people of Africa, and methodical.

Also, Another Land provides high quality cultural programs in East Africa. The programs are participatory which was exactly what I wanted. I was all set to spend a couple of days in a village as part of their regular programming but instead, something incredible happened during the booking of this trip.

Another Land had just secured a contract with National Geographic to film a video documentary on the Barabaig people of Africa. Be it fate, good timing, good karma or just the fact that they had really gotten to know me through all of the personal contacts, the president of Another Land, Nichole Smaglick, invited me to come along for part of the video shoot of these people of Africa.

I spent an incredible week with Nichole, the National Geographic film crew and the Barabaig people of Africa. I got to experience even more than on a normal village stay because Nat Geo was invited to film some of the Barabaig's most intimate ceremonies (wedding, funeral, rainmaking, gathering honey, etc). It was powerful, emotional and one of the most incredible experiences of my life. I felt very privileged to be welcomed by Another Land and the Barabaig tribe.

Was there anything you didn't you like about them?

How was the guide?

Wonderful…all of the guides were people of Africa.

Safari - I had a private safari guide in the northern parks (Godfrey). Because I was on my own, I was able to do whatever I wanted on the game drives. If I felt like watching the same lion for 3 hours, he would have done it. He really went out of his way to get me the best photo opportunities (including always turning off his engine so there wasn't any camera shake).

He shared much about the people of Africa's culture and wanted to learn about mine. We compared notes about many different things during our hours and hours of game drives. He kept in radio contact with other guides so he always knew when something exciting was happening (a leopard in a tree, tree climbing lions, a cheetah stalking some zebra, etc).

Village stay - there were a few people of Africa who looked after things at the village. There were 2 translators, a cook and his helper, and a couple of drivers (who also doubled as film crew), etc. In fact, I was also able to act as a crew member at times as well.

Zanzibar - the guide was also great. Once again, I was on my own so it was really personalized (red colobus monkeys, snorkelling, etc). I did small half-day trips only while in Zanzibar because I wanted lots of personal time.

Would you recommend somebody else use them for their safari?

I would recommend Another Land to EVERYONE. They are the best!

Some mornings were very early but that was all my choice (sunrise hot air balloon ride and the offer of sunrise game drives). My guide and I would venture out in the vehicle in the cool mornings (I was wrapped in my guide's "Maasai blanket" for warmth).

We took our time exploring the various parks in the early morning. It was a great time to see lazy lions who didn't even bother getting off the road to let us pass. The sound of the waking monkeys and birds was awesome.

One morning we saw the most amazing sunrise over Tarangire. Sunrises seem so different in Africa! We never saw another vehicle on our sunrise drives. It was lovely to be alone in the wild.

After a couple of hours on a very peaceful game drive, we would return to the lodge for breakfast. This was a great time to catch up on journaling, meeting new friends among the travellers and people of Africa.

A couple of hours later, we would venture out on another game drive. Once again, my guide let me dictate how long we would stay in any given place. After many animal sightings, we would return to the lodge for lunch, swimming, siesta, etc.

Then, if I wanted, we would go out for one more game drive in the afternoon. Once again, we would seek out animals, landscapes and all the sounds and sights of the various parks.

Then it was back for supper, lodge entertainment, meeting more new friends and much needed rest.

I was there during the dry season. It was warm and sunny but not too hot. In the northern parks, the evenings were also lovely.

In the Barabaig village, the temperature dropped quite low at night and you really had to bundle up for sleeping. The people of Africa are tough! It was glorious during the day though.

We had a bit of rain in Zanzibar but it was mostly sunny and hot.

I didn't have any complaints about the weather.

What would you say was your wildlife spotting highlight?

A "wildlife highlight" is a very difficult thing to answer because it was all so amazing. I honestly felt like I could have gone home happy after the first game drive.

Some special moments were as follows:

Were you satisfied with the amount of wildlife you saw?

I was amazed at how much wildlife I saw on a daily basis. It was overwhelming. Not one game drive was disappointing.

I was also amazed at how close we were. To be only a number of feet away from a pride of lions, to have elephants walk by your vehicle, to sit in a rest area with a vervet monkey right beside you. I never dreamed I would be that close to the animals. I always figured that I'd need an amazing telephoto lens to take close-ups like they do in wildlife magazines. Nope.

There are so many highlights that it's difficult to choose.

My only disappointment was that the trip wasn't longer. I didn't want to leave the continent, animals and people of Africa.

Everything else exceeded my expectations.

Do your research (recommended Africa reading). Know what you want to see, where you want to visit, how you want your time divided (cultural/people of Africa versus animals), etc.

Ask lots of questions and try to establish a rapport with the company representatives. Make sure they know you as a "real person" and not just another no-name traveller. 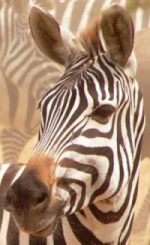 Build the trip together with the company so that you are getting exactly what you want. Because of my wonderful experience travelling with Another Land and having met all of my expectations, I have built another custom-made trip with them for next summer. Custom-made trips can be more expensive but, in the end, you will get everything you want out of your trip, and more.

Oh, Another Land has set trips too! It doesn't have to be tailor-made.

My eyes, my ears and my heart. I opened them all fully. Who cares what clothes you have on or whether your hair is done. Just enjoy the moments as they come.

Oh, and a camera with lots of memory cards!!

K.C. returned to Africa in July 2007 to visit Uganda, Rwanda and Kenya. Not surprisingly, she used Another Land again... K.C.'s safari in East Africa »