After breakfast it is time for our charter flight to Leadwood. Our individual suites are really villas as they are enormous and there are only four of them, so we feel quite exclusive.

The villas have a private plunge pool, floor to ceiling windows, stacked grey stone walls with accents of tin framed mirrors and a tin clad soaking tub in the middle of our dressing room.

Every night when we come back from a game drive the tub is filled to the brim with bubbles and sweet smelling warm water. I dive in and out because drinks are awaiting us in the lobby bar.

The lounge is four different levels for game viewing, reading a book or just soaking up the scenery by the river.

The camp is allowed only one vehicle so we share game drives with a nice honeymooning couple from Germany.

Dinner is luxurious with the chef announcing each course and fabulous gourmet food.

We fall into bed exhausted from all the excitement of gaming. It is a high a minute in the bush. Now I understand why other destinations bore me.

On our morning game drive we saw hundreds of antelope and kudus all facing the same way and Lino, our guide, shouted "Let's go", as he crashed through the rocks and brush.

Suddenly, the baboons sent up a ruckus with their warning call and the chase is on until we find a leopard elegantly prancing along the trail, marking his territory and completely oblivious to all the warning sirens. We spend an hour with him until finally he crosses the Sand River that borders our villa.

The graded dirt roads in South Africa are such a relief after the corrugated tire track trails of Botswana. They are graded by a tractor dragging old tires behind. In Botswana the big expedition and camping trucks use the same roads and the ruts are many feet deep so after a game drive you feel like you have been in a rock tumbler. Here the roads are manicured and so are the vistas.

It looks like a Hollywood set. There are broad expanses of flat terrain with a border of Acacia umbrella trees. I have to pinch myself to see if it is real.

By the year 2110 the Transfrontier will be opened and all fences will be dropped. Then the migration of the animals can continue as it had for an eternity before man intervened. Angola, Namibia, Botswana, Zambia, Zimbabwe and Kruger will all be one.

Kruger Park now has 4,000 more elephants than it can sustain because of the blocked migration routes that were used to keep the wildlife from harming the people and the poachers away from the wildlife. That is why they have to resort to culling elephants. The government now auctions to China and Japan the right to buy ivory every ten years.

Opening the frontier will solve all of these problems.

The young male elephants are booted out of the family at a young age and often become rouge elephants without enough parenting. We watched sadly as a young elephant tried to come back into his family but his mother, the matriarch, bellowed loudly at him and head butted him out of the group. How sad for that young male to be ostracized from the only family he has ever known.

This property has a pride of 8 vicious and cannibalistic lions that no one messes with. It is a huge territory but no other males will come near. They recently took 5 hours to drown a toddler hippo in the mud hole, with his mother crying and making a valiant effort to save her baby.

There are 2 big 10' crocks sunning on a rock in the Sand River. Their mouths are wide open so the birds come to pick their teeth of the decayed meat.

Next to Leadwood is a new 3 star lodge called Inyanti Game Lodge. It is very lucky to have such good gaming, but will the Sabi Sand be diluted with the additional vehicles?

We watch as dwarf mongooses mate. No foreplay, just wham, bam, thank you mam. They are cute little furry critters with a pink nose and pointed snout as they scramble over the logs between mating.

I have never seen as much wildlife as on this trip. I think our wonderful traveling companions are also good luck charms.

Next we see a crash of white rhino including several babies. These babies are a ton of flesh and only two months old. Their little square mouths are mowing the grass like a farmer's combine. No wonder they grow so fat.

Rhinos became almost extinct because the Asians believe that the horn is an aphrodisiac. Science has proven that the rhino's horn consists of only keratin, the same substance as our hair and nails and has no sexual enhancement powers.

However, a rhino horn will still sell on the black market for thousands of dollars so poachers can get rich quick.

Meanwhile, in the clearing a small bird is dancing in a circle around her nest on the ground with her wings fully outstretched. There are elephants passing through who are coming too close to her eggs.

Everywhere the smallest mothers are protecting their young from the largest creatures on earth. Finally the eles moved on and in despair the bird flew away. We came close to look at her tiny black eggs that looked just like pebbles from a stream.

« Previous part of this trip 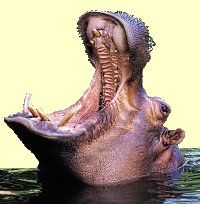