So now we plan a quick, quiet romantic weekend to the Kruger National Park Africa. What happens next? Three friends would like to come along to make that a raucous, abusive and drunken visit to South Africa. So the planning starts and we end up in having to go on two safaris. 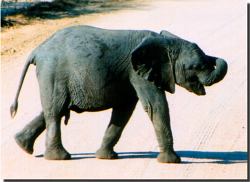 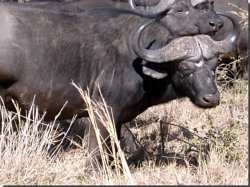 We could have gone and hired a car and driven all that way but why do that when it is a lot easier to call up super guide Bradley at XSTREAM Safaris and an xstream weekend we had.

Bradley does all the nasty stuff like finding out where the animals are, doing all the bookings deposits and payments, plus worries about catering and those ever so nasty to carry around TENTS!

We were woken up early on a cold crisp Johannesburg morning, fed coffee (nursing a few strangely only mild hang overs) and off we were.

By 4 o’clock we were crossing the Crocodile River (with LOTS of crocs) and entering the Kruger National Park africa. It was not long and we were spotting game, late winter is always a dry time of the year but this was particularly dry, but that is good for spotting game as the grass is not too tall and the trees are bare, plus most of the animals are dependent on drinking water everyday. So in the last remaining hours we leisurely drove until we got to our camp Pretoriuskop.

When The Lions Feed

By sun-down we had already seen some sleeping rhinos and a pride of lions feeding on the carcass of a male rhino, which had been killed in a territorial battle.

Up at the crack of dawn and out looking for game again, our expert guide knew all the spots to take us to. We saw buffalo, giraffe, zebra and luckily some more lions.

With the day drawing close we were beginning to despair- NO elephants.  Where were they? We just could not find them.

Then Bradley said "I know a place" and in that brilliant late afternoon light there we found a breeding herd of Elle's. The matriarch gave us the sign to STAY! where you are which we did and slowly they came out of the bush both mums and babies.

That evening we went on a night drive to look for some of the nocturnal oddities but unfortunately we didn't see leopard but we did find many of the antelope nervously trying to catch a bit of rest, but it is not easy with all the big hunters preferring the cover of darkness. As we rounded a corner there was a magnificent lioness laying lapping up the last of the warmth from the warm sun baked road. She got up and then snuck into the grass disappearing within feet of the road. She moved and then started to roar!!!! WOW.

Early again! This time for a game walk. With the bush in the kruger national park africa as dry as is was I knew that the animals would see us long before we could see them UNLESS they have poor eyesight----rhinos----we spotted the first one before he saw us but the second one spotted us first and decided that he was threatened and we knew we were in trouble. Our ranger had emphatically said NEVER repeat NEVER run but we knew there was trouble when our ranger screamed RUN!! The rhinos tracks covered ours in the spot were we were, it is amazing how fast tourists can actually run. This was an xstream adventure.

Our late afternoon drive was rewarded but the spotting of a young leopard as he crossed the road in front of the vehicle, but that spotting had a price, we were late and the gates to the rest camp were closed.

After some Kruger National Park Africa negotiation we were allowed back in but would be fined, only a small price for the opportunity to see such a beautiful leopard.

That night there was much talk of being charged by rhino, seeing leopard and the prospect of having to endure a full night outside the protective fence of the rest camp, not a nice thought especially having seen and heard lions already. Grub was a fantastic potjiekos (pot stew) and there ain't much better than the African night warm company and a few easy G&Ts. 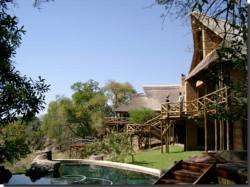 Lukimbi: on our journey out of the Kruger National Park africa we were very lucky enough to be able to visit one of the special new luxury camps in the Park, and after camping boy did luxury have a bit more of appeal!

We dined for lunch on the chefs special menu and sipped our drinks while overlooking the African Veldt in pure decadence, the same thought going through all our minds, 'just a night or two or three, next time'.

The Fairest Cape was next on the agenda after the Kruger National Park Africa and it was a shock to be back in a city again.

Our first sight see was a new one, A VERY large container ship had beached by one of the Cape's notorious storms. The captain of the vessel ignored all warnings and needless to say he was promoted to captain of a cell in less than 6 hours. 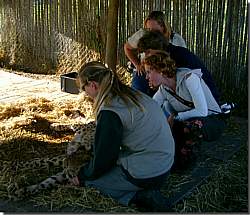 The true fairness of the Cape is found in the winelands. Our tour of the vineyards was short but oh so sweet and the cherry on to was going to Spier Wine Farm and visiting the cheetah centre. There is little that can be more rewarding than experiencing contact and interaction with such an animal.

Round about the mountains we go looking for the Jackass of Cape Town. They can be found at Boulders Beach (the penguin kind of course) and we took the scenic route around Camps bay over the neck and through Constantia to Simons Town and on a cold and miserable afternoon.

We saw the Jackasses climbing over the rocks and trying to hide from the weather under the coastal vegetation and some peoples gardens (leaving evidence of their overnight stay). After an especially nice day we treated ourselves to dinner at the famous Brass Bell, and it was sooooo good we could hardly walk out.

Leaving Cape Town we went in search of South Africa's largest mammal -WHALES. We went to Hermanus and De Kelders to find them as they had recently arrived to breed and calve in the calmness of Walker bay. Eighty whales have been counted in the bay.

The sedateness of the huge whales seemed a little too tame so we booked to go on a shark dive.

Gansbaai (Goose Bay) has a famous island whose waters are inhabited by very large (and non-vegetarian) GREAT WHITES. After weeks of physiological hyping up our day was around the corner and everyone was a little TENSE.

The gods however had thought we had had more than enough adventure especially after the rhino charge in the Kruger national park Africa and we awoke to a sea with swells of 5 metres, the boat ride alone would have killed us and we would have been the shark chum for the next intrepid adventures, so we will return and thank our lucky escape.

We spent our extra time relaxing in a little town called Stanford! Our Kruger national park Africa safari had nearly reached it's end.