We stayed at a very relaxed backpacker's in Nelspruit for 1 night, where you can play darts, swim or just laze about. The set up is very friendly and hassle-free and they even have double rooms with en-suite bathroom (albeit a red bath!!). It's situated right next to a bird sanctuary so we just sat in the garden sipping sundowners, listening to their chirping. 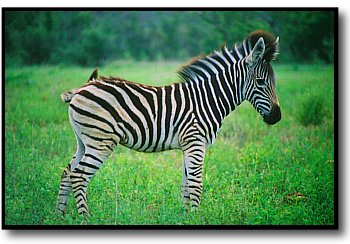 The next day we set off to Marloth Park bordering the Kruger National Park SA in the south west. My brother-in-law has a house there so we spent half a day with him and the kids - and in case we forgot, were reminded just how hot the African sun can be - 40C! We spent most of it in the air-conditioned bar/restaurant watching cricket and jumping into the pool.

At sunset we drove to the look-out point above the Crocodile river which is also the border between Marloth and the Kruger. We were a bit stunned by how low the river level was. We didn't see much game (waterbuck and some birds) but being back in the African bush was satisfaction enough!! 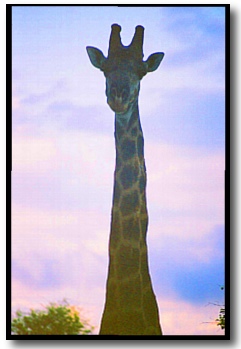 After an early start the next morning we headed off to Malelane town where we stopped at the fantastic River House for a glass of orange juice (too hot for coffee!) and saw our first game of the day from the wooden terrace: 3 giraffes walking along the opposite river bank ever so elegantly.

We also saw 2 white rhino along the river bank but even with binoculars it was very far away.

Entering the Kruger National Park SA through Krokodilbrug Gate, we headed north to Skukuza and came across something so cute.

There were little tortoises every few kilometres, drinking from small rain puddles on the tar road. Not a very safe place for them to be, so visible, but I'm still chuffed that we could see that.

The rain in the air must have been the cause for the behaviour of a herd of wildebeest who were noisily running around, acting absolutely crazy and playing like there was no tomorrow. We switched off the engine and just sat watching them for a while. How amazing!!

The Kruger National Park SA offered us a nice variety of game that day - after the wildebeest we saw amongst others white rhino, more giraffes, zebra and of course the ever present impala and lilac breasted rollers.

We stopped by at the Shiloweni dam and got another shock about the state of the park. It was so dry. The dam level was extremely low, so much so that we could see the fish splashing around in the centre of it.

The crocs had a feast of course and you would see one lazing on the mud bank, simply take a few steps forward to pick and choose a few fish with no getaway chance, when he got hungry. 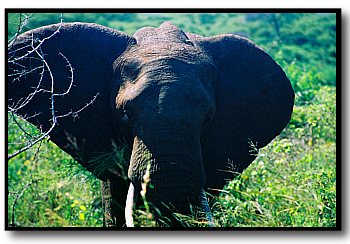 There were also a pod of hippos almost literally stuck in the mud. This was very sad, as they couldn't survive at that dam for much longer if it didn't rain. We thought they would try and transfer to another nearby dam during the night very soon after we saw them. Wouldn't that be a sight to see!

While sitting at this dam, watching the unfortunate fish and hippos, out of nowhere appeared a lone elephant. He splashed around in the mud a bit, drank a bit of water... a nice performance. Next thing he got a bit too close to one of the (big) crocs and clearly showed us who was the mightiest one around - the croc quickly slithered into the water out of the elephant's way.

After that the elephant decided to walk off - straight in our direction. Panic on everyone's faces (about 5 cars had gathered in the dead end road) as the only way out is to drive directly into the elephant's path and putting yourself and/or the other cars in danger of an aggravated elephant bull!

Our guardian angels must have worked overtime as the elephant decided at the last minute to change direction and stormed off into the bush ahead of us. Even though we were in a car (ours was the smallest one!) we didn't feel all that safe from the majestic African elephant.

At the Orpen dam we saw 2 giant plated lizards - really prehistoric. This is the advantage of going to the Kruger at a relatively quiet time, there weren't any other people at the lookout point when we got there or we probably wouldn't have seen them. 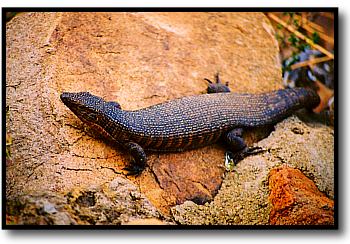 We didn't see many of Bruce's favourite, the warthog, as they seem to be very vulnerable to drought. So the ones we saw were even more appreciated. They are as cute as they are ugly, if that makes any sense.

We came across families of baboons on more than one occasion. I simply love watching them and could do so for hours and hours: playfully pulling each other's tails, the mothers scalding the young ones when play gets too rough. Just like humans!

It was a long day in the car as we drove all the way to Satara. We were spoilt with sightings of Bateleur and Tawny eagles, vultures, gymnogene, 3 hyena cubs in a very lazy state and a small dead snake. The variety of wildlife is just incredible and we were surprised when a big safari truck didn't stop for the mongeese peeping out of an ant's hill near Skukuza. I guess if the animal isn't big and impressive enough it might not create a "buzz" in the group and therefore they keep moving in search of the Big 5.

After our arrival at Satara where we stayed in an air-conditioned bungalow for a change (we usually camp but decided to live it up a bit since we were travelling with British Pounds as opposed to South African Rand. In hindsight the air-con was a blissful escape from the mad heat but you simply can't beat camping!!). That night a storm broke and it was truly a Godsend and I could just imagine those hippos getting unstuck out of the mud. 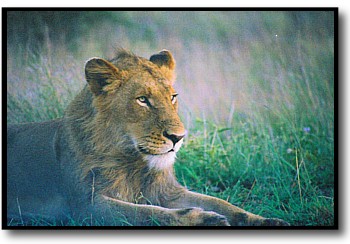 After a good night's sleep we were one of the first cars out the gate the next morning and that always pays off. We saw giraffe, zebra, wildebeest, warthog, hyena, elephants, ground hornbills, buffalo, a (live) snake, an eagle having lunch under the trees on the undergrowth - we think it was a young fish eagle (brown in colour). Also on our tick list were Bateleur eagle, waterbuck, baboons (uhm, a very randy bunch of baboons actually) and later in the day, before sunset and gate closure, one of the most wonderful sights and one that will stick in my mind's eye till the day I die.

Two young male lions were lying right next to the road, staring out across the savannah with the breeze lightly blowing through their manes. Oh, they looked so majestic, the kings of the animal world that they are, and so totally in control even in that relaxed position.

We sat watching them from the car for a long time as they got up, yawned, stretched and lay down again until eventually they decided it was time to move on and walked a dignified walk across the road and into the veld. The backdrop of the dark skies of an approaching storm formed a contrast with their tawny bodies which slowly merged with the colour of the grass until we could no longer distinguish them clearly. I am still in awe just thinking back to that moment.

On the way back to the camp we saw a glorious rainbow - what a perfect end to a day in the Kruger! 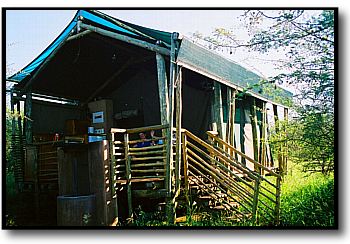 The next camp on our itinerary was Lower Sabie. We stayed in the new tent camp which was built after the flood. The whole camp looks great, the new restaurant and reception building is truly on international standards and has a very new and modern feel to it.

his time number 13 held no bad luck whatsoever and our tent was fantastic with views into the bush and across to the river. It really is the best of both worlds with your own hot water private bathroom, a fridge and utensils, our own braai and porch...luxury camping at a price cheaper than the bungalows. An experience not to be missed! We needn't even have left the camp because while there we saw hippos, crocs, baboons and a highlight - a family of elephants crossing the river. Big and small ones, trumpeting as they played and even rolling in the water and the older ladies helping the young ones up the steep opposite bank.

The next day, on our way back to the camp we got stuck in a traffic jam of a different kind. A massive herd of buffalo was grazing on both sides of and across the road and taking their time doing it. Give me the kruger national park sa kind anytime instead of the city-kind!

On our last day we were cruising along and as we approached a ford we spotted a Malachite Kingfisher - doing what he does best. He was sitting on the dam wall with a small fish in his beak. Small for us, but big for the bird! He kept changing his grip on the fish and hitting it against the dam wall. Every now and again he would try to swallow it but it would still be too big/firm and he would continue hitting his lunch to a pulp against the wall. He was so engrossed in this process that we could get really close and watch the process. There weren't any other cars around but eventually one came up so we had to move on but the Kingfisher was still bashing away as if to say "I caught you, little bugger. I don't care how long I have to do this but eat you, I will!"

Once again we had a fantastic Kruger holiday, even though it was only 4 days long. Batteries recharged and souls fed, we left the Kruger national park sa with big reluctance. The ever elusive leopard ensures we will be back... 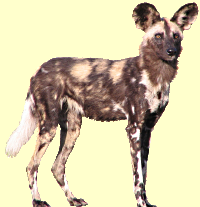