Some people might say four days is a bit long, but I think you can even do shorter trips. Not for me, but some people might get bored after the second day if they saw a lot from the start, but I loved it! 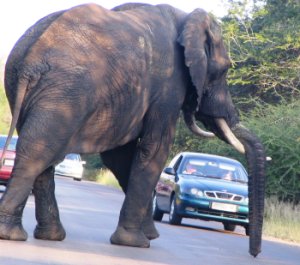 I did a whole trip all over South Africa with Baz Bus - Cape Town, Jo'burg - and then went to the Kruger Park for the safari there with the Bundu Bus organisation.

I went with my sister and she just looked on the internet for a South Africa safari in the Kruger National Park and to do it not on your own, but to have a nice group tour.

We were about 12 people in the one bus and it was quite international, with people from all over the world. We wanted to do it like that.

How did they perform? Was there anything special you liked about the service they provided?

It was excellent, I really enjoyed it. The guide was friendly, really nice and quite knowledgeable about the animals.

It was very nice getting to know all the people on that bus; after four days of safari you get to know each other really well.

It didn't really feel like an organised trip, because you still were free but it was nice that he drives around. We saw all the animals and everything.

It was a really nice experience.

They set up camp, and the meals were all included.

Would you recommend somebody else use them for their safari?

I recommended it to people after I went the last time and three friends of ours did it. One of them wasn't so happy with the people that he'd ended up in the bus with, they were older couples and he was like the bachelor, but that can't be helped.

The trip was very well organised; it's a very nice formula on which to tour the Kruger National Park.

The 4-day trip started in Nelspruit from where we went into the Kruger Park for the safari. It was a tent-based camp.

So the nights we spent in these tents, and then during the day we would go in the bus and drive around with the guide.

The last day it was a private resort camp that we stayed in.

Some of the camps the tents were of the permanent type, with beds and that.

One of the camps we used was Skukuza.

We made a lot of our own food. We started off going to the supermarket and the guide got everything and we could get whatever we wanted extra.

One night we had a barbeque.

Another evening we went into a spa resort and there we had South African dinner.

Only the leopard we didn't see. Out of the big 5 we saw everything except the leopard. Besides that we saw almost everything. Even from the first day, we were really lucky.

And then we went touring around and lunchtime we would stop somewhere at the different points where you get the fuel and we'd buy something to eat, and then drive around again.

We had to be out again by 6 in the evening when the park closes.

In the evening we'd have a barbeque around the fire. We would all have our different chores like, the one would do dishes, the other people would help with cutting up the food, it was nice.

One of the days, we had to be back at 6 in the evening, and around 5pm we stopped for elephant that was really close to our vehicle.

We wanted to move on but it turned out we had run out of petrol. There was no fuel at the lunch stop or something, we only found out about it in the evening.

So we sat in the bus until 9 in the evening because there is no [cell phone] reception in the park. Only at the end one of the guys that was in the bus, managed to go on top of the bus and stand up with his hands in the air and he had reception.

I think it was about half past 9 when someone came to get us with another vehicle and gave us some petrol.

But it was a bit of a scary moment, the guide was preparing us on what to do if an elephant should arrive - we might have to get out and run because they can flip over the bus. We thought "o no, we're going to die!"

It was all funny, we were all laughing and some needed to go to the toilet - during the whole trip you can't go out of the bus for toilet stops. And we had to go outside the bus, like really close and looking for animals.

It didn't happen - no elephants came - and we were all fine. That evening we were all around the fire and laughing and drinking and that, at the time we didn't think it was so funny!

The last day there was a walking safari included but I didn't do it, I was a bit too scared. It was included in the price. Maybe next time I will do it.

Now that I've been to the Kruger I'm not tempted to go to a smaller park, it won't be the same.

My camera, I think over the 4 days I took about 7 rolls of pictures. I love taking pictures.

Did you take anti-malaria medicine?

I took the medicine yes, but didn't have any problems with it or with mosquitoes.