A weekend in the Kruger Park is always a great experience, even though it can get busy during school holidays. As we have noticed before, the animals are oblivious of human calendars and we were blessed with some fantastic sightings. 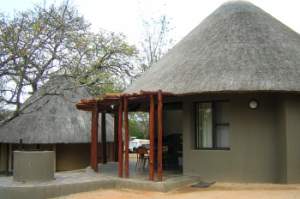 We stayed in the following Kruger Park accommodation:

We stayed in one of the basic huts (no electricity, no fridge) this time. It is a detached rondavel (round bungalow with thatch roof) which has mosquito netting on the windows and a double-door system to keep the bugs out as well. The unit had 2 single beds, a basin, table and 2 chairs, a braai (BBQ) and sufficient hanging/packing space for a short stay.

Ablutions and kitchen facilities (2-plate electric hotplates, washing-up and boiling water always at hand) are shared and you have to bring your own utensils and plates. Bedding as well as towels and soap are provided and the units are serviced daily. The hut was fine but could use a bit of renovation… and for the price it was good value.

The huts are arranged in a big circle (as in quite a few of the Kruger Park camps) and it is quite cosy when everyone lights their fires at night and you sit outside enjoying dinner and listen to the bats flying overhead or squeaking in the nearby trees.

I was looking forward to seeing the new information centre at Pretoriuskop, but it wasn't open during our brief visit (opening hours 9am-4pm on weekends only).

We had a quick peek at one of the bigger units with en-suite that had recently been renovated (they are still busy with more units) and it really looks good: spacious, clean and modern but not over the top.

We stayed in a basic hut, a level up from the one we stayed at in Pretoriuskop. It was a semi-detached hut with 2 beds, mosquito netting and its own veranda with braai (BBQ). Again, bedding, towels and soap were provided and this time we had a fridge and electricity too. No utensils or plates were provided and the bathroom and kitchen facilities were communal.

Renovations are still taking place at Lower Sabie and the building operations is obviously not very pretty, but once they're finished it's going to be beautiful. Some of the river facing units are already finished and although you are fairly close to your neighbour in some cases, you have stylish yet plain décor leading on to your personal stoep (veranda) with wooden finishing and a river view.

Lower Sabie remains one of my favourite Kruger Park camps. Wildlife viewing in the area is great, but also from camp as there is a large deck overlooking the water where you are almost guaranteed to see hippos, crocodiles and a variety of birds.

We prefer to self-cater and bought our groceries and drinks outside the Kruger Park at a supermarket (much cheaper). Also, we prefer to have our breakfast in the car while watching wildlife at a dam, much better than sitting between four walls, in my opinion!

We arrived really late on our first night, in fact after the shop had closed and therefore we couldn't have a braai as planned. So we decided to put the take-aways restaurant at Pretoriuskop to the test. We ordered two cheese burgers with chips for take away (R70 in total) and enjoyed it at our hut.

In the morning we made a flask of coffee (boiling water is always available, on tap, at the communal kitchens) and had it with rusks while sitting at a dam. This is a bit of a tradition!

We wanted to cook a nice brunch at Skukuza Day Visitor Centre, but by the time we arrived there after all our nice sightings (around 1:30pm on a school holiday Saturday) there was no gas available. There were lots of people around and we didn't feel like waiting 45 minutes for gas, so we moved on. 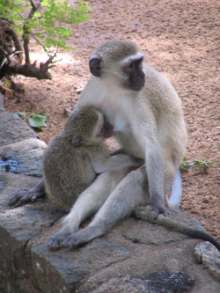 We finally had "breakfast" at Nkulu Picnic Spot where it was thankfully quieter and gas was available. Monkeys can sometimes be a nuisance at this spot but they were fortunately at the far side from where we were sitting, with a nearby staff member watching over them, ketty (slingshot)* in hand.

* The monkeys become a nuisance in the Kruger Park only because people feed them. They become cheeky and try to steel food off people's tables, plates, even out of their hands (it happened to me once). If such a troop's behaviour becomes unmanageable, the whole lot has to be shot. So, that's why you shouldn't feed the animals!

On the second day we had our brunch at a more decent time, at the N'wagovilla Hill picnic spot. It was a rainy day and we had the place (and the gorgeous view) to ourselves for most of the time, except for the cleaning ladies and a whole lot of birds.

Later in the day we stopped for fresh scones, cappuccino and a white hot chocolate at Skukuza's Nature's Cafe while being watched over by the resident fruit bats. It was excellent!

Food isn't much of a priority when we visit the Kruger Park, wildlife viewing comes first!