I never realised the roads between Mombasa and Nairobi would be this bumpy. Me, my wife and our guide traveled towards Tsavo East where we entered the Buchuma Gate, a relief really after a three hour slog over treacherous grounds. At last we could see or possibly spot some wildlife (get the camera and camcorder ready). 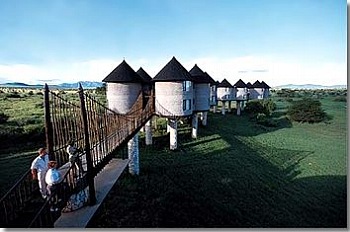 The word must have got around about our visit - not a single sighting of even the lonely gazelle for the first couple of miles, even that was worth a picture and a smile. My wife setting up the camcorder - getting ready for the first filming of whatever came along, either being a herd of elephants crossing the road or even just a zebra walking across the savannah. You could see her excitement written all over her face.

Our driver now becoming more and more anxious at not seeing anything of interest to us, you could see the awareness whilst manoeuvring the vehicle between the ruts in the rough track, trying to continue the smoothest of road ahead, not always possible.

Driving along in anticipation of seeing anything really, me with my camera at hand and my wife eagerly waiting for a glimpse of something to film, when suddenly the driver shouted, "Over there!" as he pointed a finger to his left and both our heads immediately turned, hopeful to catch sight of something of interest.

In the distance a mother giraffe and baby were walking through the dense bush with not a care in the world. We tried to proceed closer to get the first close-up, only to scare it away and unfortunately only getting a picture of the back end galloping back into the bush. Damn, I thought, a good photo opportunity gone begging.

On we continued with the excitement of seeing more of the same, looking both skywards and into the distance (there's some amazing bird life out there as well). We seemed to be coming into contact with a large variety by now, with a herd of elephants in the distance and a mix of zebra and gazelle on the other just grazing together, with not a care in the world.

My first real photo opportunity came as we drove in as close as possible to get the ideal shot. On we drove until the driver brought the vehicle to a stop, pointing to a herd of elephants proceeding down the right hand side of us, slightly disturbed by our abrupt action, and then continuing their walk. The driver explaining his actions and the actions of the elephants, to our amazement.

We quickly took aim at what was an amazing sight of a family (plus granddad and grandma) of elephants crossing the road at no more than 200 yards from us. This was a beautiful sight! We gingerly crept past without disturbing too much. The odd marabou stork appeared here and there just off the track, an impressive bird to say the least. We also spotted other varieties of bird, the much smaller kind (too far away to recognise).

We soon approached the exit to the safari to proceed towards our lodge for the night stay (Ngutuni Lodge). A very pleasant residence of medium to high class, overlooking a waterhole. Considering we were the only residents at the time, we were treated with the full attention, to our every need.

The facilities were as said above with a small shop inside the grounds selling gifts. The time that we were there, we wouldn't change anything really.

We had a very relaxing and enjoyable time looking at the occasional warthog visiting the waterhole and a secretary bird flying by, sometimes stopping for a drink.

A two hour safari drive awaited us, good job for the absolutely brilliant weather – sun, blue skies. Not seeing much more, the occasional herd of elephants or few giraffes passing by, but the views almost compensated the rest of the afternoon.

During the end we came across a small pride of lions lazily lying in the shade, resting after a kill, ignoring our delicate advances in the vehicle to get the perfect shot. Our driver climbs a different route back, looking back at many herds of elephant in the distance and for once buffalo grazing. "Don't get too close," whispers the driver.

We got back to the lodge quite satisfied with our day. A table laid for two awaited us overlooking the waterhole, maybe a chance to spot some wildlife passing by, or even stopping for a drink, that would be a photo opportunity.

The food was served with all the attention on us: a delicious three course meal in a delightful setting. After a long day we settled down for the night.

A Lodge Built on Stilts

We started with breakfast followed by the departure from the lodge. We continued towards Tsavo West where we eventually arrived at Salt Lick Safari Lodge, an absolutely amazing sight: rooms on stilts connected with walkways-bridge.

The driver dropped us off and departed, leaving me and my wife time to settle in. Taking in the amazing structures of these buildings I had to reach for my camera.

We decided to have a coffee upstairs overlooking the waterhole, only to notice two maribu slowly walking about. My wife took out her camcorder and spotted a herd of zebra walking towards the waterhole. Not much more was spotted really, the odd gazelle walking by.

Tsavo has a reputation on being wetter on the west and no sooner had that thought passed, down it came for most of the afternoon, we sat there just gazing at the bleak weather.

Mind you, the marabou didn't mind, they looked like two old wise men, hands behind their backs, walking up and down, or just being marabou, standing still trying to forget the rain.

Lunch was served to half of the restaurant, a pleasant three course menu which we thoroughly enjoyed. By now four o'clock was creeping up on us, time to get ready for our safari drive.

The King of the Jungle Cornered

We met our driver with camera and camcorder in hand - feeling a bit optimistic really considering the bleak day.

During a short drive the driver suggested that we take down the top, so we could peer above for a better view. By now the rain had eased off. Slowly we drove forward - sneaking up on a herd of hartebeest, grazing quietly just ahead of us - a good shot. More gazelle ahead - "blase", I told the driver to "drive on", as he began to slow down.

Again a herd of zebra appeared moving away from us, then suddenly a change of direction with a reason unbeknown to the three of us, then again a change of direction, we all thought how very strange.  The weather began to change for the worse again, so my wife opened her umbrella. It was in full view to the outside but giving us shelter, which was much more important to us. The driver stopped his vehicle to talk with his passing friend, a ranger I think.

A look of excitement overcame him as he spilled the good news that a male lion had been spotted. That was the reason for the disturbance with the zebra. We back tracked and followed the ranger only to be pointed to the exact spot of the lion - very difficult to see in the undergrowth, but we spotted the king of the jungle through camera and camcorder respectively.

The reason why the lion cowered in the undergrowth was the fact of my dear wife opening the umbrella and that being spotted by the lion, not knowing what this big black object was, resulting in the actions of hiding. I got a relatively good shot of the head.

We moved on to spot impala, baboon, eland, oryx, all getting our full attention of my camera.  The time surprisingly passed very slowly considering the amount of wildlife spotting we were experiencing.

We arrived back at our lodge, proceeded to our room and got ready for our evening meal, all the time keeping an eye on the waterhole, on the off chance of seeing something of interest. A light shone on the waterhole so guests could view any wildlife willing to show their faces, but unfortunately not this time.

We helped ourselves to the delicious buffet on offer, finished off with a coffee.  We retired soon after.

We made our way towards Voi Gate, the entrance into Tsavo East. The thought of going back to our destination via Tsavo East really appealed to both of us and the driver seemed quite happy to oblige. Again we saw the usual wildlife, most of the time driving past without a second glance - "seen it before".

I noticed a lonely elephant wandering in the light bush, quite old with impressive tusks. The driver pointed out the reason why and how often the other elephants would visit to make sure it was o.k.; this explanation put a smile on our faces. The highway was nearing and the wildlife getting more and more sparse, but never mind, we'd seen our share of what we came here to see.

An experience never to be forgotten, well not in mind at least. All the pictures I had taken had failed, all five films - absolutely blank.

This is one of the reasons I'd love to go back to Kenya to see the safari, I also intend to buy a new digital camera rather than the manual one I used.