Shaun really enjoyed his first African safari despite his getting sick towards the end. He told me all about his experience over the phone... 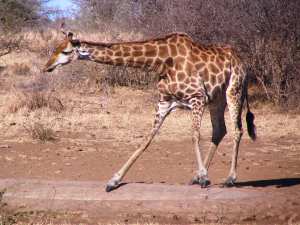 I went with a travel agency. It was Kuoni. I booked the pre-designed safari tour beforehand.

I just looked through lots of brochures.

How did they perform?

The safari was fantastic.

The guide, did he know what he was doing?

Oh, very much so. He was very good; very informative.

How big was the group you travelled with?

There were 5 of us in the end, in the truck which was a cross between like a Land Rover and a minibus, the top can come off.

We were at three different lodges in Tsavo West. We stopped at one every night. They were really good; excellent.

One was called Kilaguni, one was Ngulia (prices and reviews at TripAdvisor) and I can't remember what the first one was called.

The dinners was a menu but the breakfasts was a buffet. In fact we had breakfast, lunch and dinner. The lunches were the same - it was buffet.

We didn't have any rain on the safari itself. It was never really hot in Tsavo West, but it was always dry.

We saw everything, except for rhino. Saw leopards, hyenas, giraffes, zebras, elephants, hippos, and baboons

What would you say the wildlife spotting highlight was for you?

When we saw a lioness and her two cubs, because well Chloe's the only one who got a photo of them! That was the highlight for me. They were the only ones we saw as well.

Were you satisfied with the amount of wildlife you saw?

Yes, the only disappointment was that we only saw the one lioness and no rhino. They've got like a rhino reserve where they go at certain times of the day, and they say that the rhino when there's people there they tend to hide in the bush so they don't get to see them very often, which was a bit disappointing.

Well we'd get up, have breakfast and then we'd meet at about 8 o'clock in the morning and go out for a drive as we'd be moving from one lodge to the next... so we went out all morning on a game drive to reach the next lodge at lunch time.

What were the condition of the roads?

No, not on the actual safari. For a first time, it really was nice. It was a good introduction to safaris.

No, they're pretty well covered. We were told what to expect and we got pretty much what we expected, to be honest.

Like I say, the lodges we stayed at were all first class, they were superb.

Did you take any anti-malaria medication for your safari and did they cause any side effects?

Yes. I was sick for 5 weeks afterwards. I took Malarone - the strong one. Actually it was on the morning that we were leaving (starting to feel sick) not the last day of the safari, but on the Monday when we were travelling back to our resort. I got struck then quite ill, and I was there for another week and then 5 weeks when I got home, I was sick. The doctor thought it was from the malaria tablets. I had all the symptoms of malaria but I didn't have the disease itself.

Probably paracetamol tablets, I would think! That was just purely because I was ill on the last night and I had the shakes and a fever, so they cooled me down!

Did they provide binoculars, or did you take your own?

No. We could have hired them, I think. But I found my camera was adequate because we got close enough to the wildlife... I just used my digital camera to zoom in.

Even though you got sick?

Well, yes, I mean that was by the time we finished the safari. But that goes with the territory, I suppose! We're just makes me more determined, we intend to do another safari. I would go on a longer one this time, just to prove I was just unlucky. It certainly didn't put me off.

I'd like to go to Kenya again, but I just want to go to the whole of Africa, really! My dream is to go to different parts just to experience them.