Turtle Pictures Yours To Use For Free 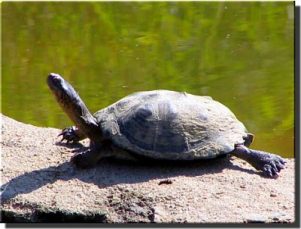 Turtle pictures and photos normally show the amphibians paddling around in the water but the one in the picture above decided to climb onto a low lying dam wall to sun himself.

He wasn't too bothered when I came along and I managed to snap this turtle photo while he soaked up some rays. There are numerous turtle species in Africa so the opportunity to take pics of them normally presents itself quite frequently.

You often see them sunning themselves in groups on rocks at a waterhole or dam. They survive on a diet of water grasses, insects, worms, snails, small fish, amphibians, and crabs. They can hold their breath under water for a considerable length of time.

The mortality rate for young turtles is high so if you can snap turtle pics of babies consider yourself very lucky. They are preyed on mainly by storks, herons and crocodiles and can be aggressively territorial.

I've seen one hitching a ride on the back of a hippo before and others living dangerously by getting very close to the gaping jaws of crocodiles. It's not particularly difficult to get photos of them because they are so slow moving and there are always several of them at the larger waterholes.

The biggest challenge is to get them doing something other than swimming in the water or basking in the sun. They seem to do a lot of both every day and not much else. 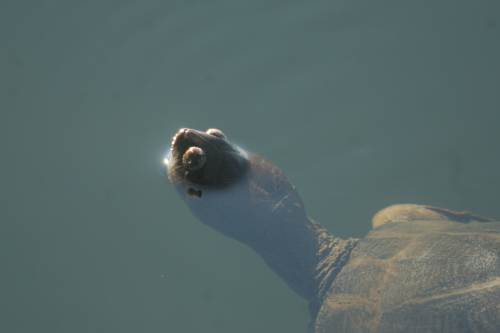